Worshippers Under 50 Denied Entry to Al-Aqsa 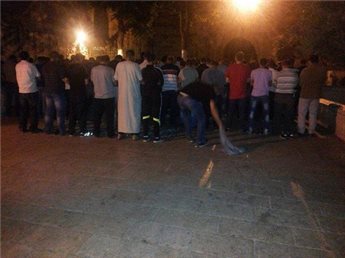 Israeli police in kept the Al-Aqsa mosque closed to worshipers under the age of 50 for the second day, on Tuesday, according to an official.
Azzam al-Khatib, director of the mosque, told Ma’an Tuesday that Palestinians under 50 had been turned away from the entrance of the holy site since Monday evening.

He said that an exception was made for students who study in the compound, and that they were allowed to enter at 8am.

Meanwhile, a Jewish group was allowed to tour the compound, as the restrictions on entry coincided with calls to perform Talmudic rituals by right-wing groups who raised Israeli flags on Israeli Independence Day.

According to WAFA, hundreds of Palestinian worshipers performed early Tuesday dawn prayers in the roads and alleys of the Old City of Jerusalem, after being denied entry by police.

An Israeli police spokesman said that he was not familiar with any closures.

The compound sits just above the Western Wall plaza, houses both the Dome of the Rock and al-Aqsa mosque, and is the third holiest site in Islam, Ma’an reports.

Most of the injuries of 222 Palestinians who were injured during clashes in and around East Jerusalem, this past month, were in connection with the entry of Israeli Jewish groups into the Al Aqsa Mosque compound.