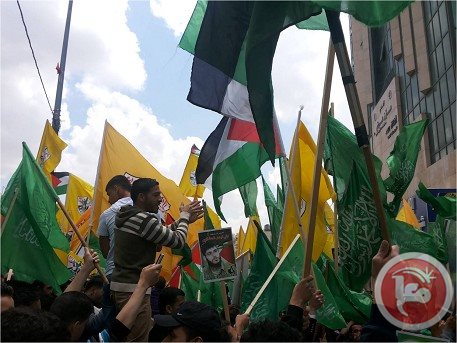 Rallies were held across the West Bank and Gaza Strip, on Friday, as nearly 100 Palestinian entered their 16th day of hunger strike, in protest of Israel’s ongoing administrative detention policy.
In 2012, Israel made a promise to put limits on this policy, in which Palestinians are held without charge or trial, under conditions which are quite severe. The agreement, which ended the strike of 2,000 Palestinian prisoners, was also meant to end detention without trial for Palestinians, but as of March 1, 183 Palestinians were still being held under administrative detention, Ma’an reports.

On Thursday, the vast majority of more than 5,000 Palestinian prisoners being held in Israeli prisons took part in a solidarity hunger strike with the nearly 100 prisoners who have been refusing food since April 24.

Rallies held in solidarity and support of the prisoners took place in the West Bank and Gaza Strip, on Friday, when the Coalition of Youth of the Intifada, Hamas, and Islamic Jihad called for a ‘Friday of Anger.’

Thousands also took part in what organizers claim are some of the largest rallies in the city of Hebron has seen in seven years.

The governor of Hebron, the mayor, along with former ministers and leaders from both Hamas and Fatah are said to have attended the protest.

In Tulkarem, over 150 Hamas members took part in a solidarity rally, in one of their first public appearances in the city since the unification deal.

In Gaza, Islamic Jihad rallies took place beginning at a number of mosques in Khan Younis, while Hamas initiated marches from mosques in Jabaliya refugee camp, north of Gaza.

Palestinians held in administrative detention are often held without charge or trial for months, without even knowing why they are being detained, even though international law stipulates this tactic only be used in exceptional circumstances, according to Ma’an.

The laws used in this practice date back to the British Mandate period of Palestine.