Kerry To Meet Abbas In London 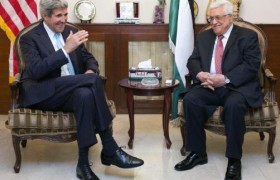 U.S. Secretary of State, John Kerry, will be holding a meeting, on Tuesday, May 13, 2014, with Palestinian President, Mahmoud Abbas, in London, to discuss efforts meant to ensure the resumption of direct Palestinian-Israeli peace talks.This would be the first meeting between Abbas and Kerry since direct talks with Tel Aviv tumbled a month ago due to Israel’s ongoing invasions, violations, and its illegitimate settlement construction and expansion activities.

Israel also refused to release the remaining veteran Palestinian political prisoners, held since before the first Oslo Agreement of 1993.

United States National Security Advisor, Susan Rice, stated the U.S is committed to the political process between Tel Aviv and Ramallah, and will continue to act to ensure the resumption of talks.

Her statements came last night, during an event marking “Israel’s Independence”. She called on Israel and the Palestinians to resume direct talks to advance towards peace in the region.

She said it is not too late to resume direct talks, and urged both parties to refrain from “unilateral moves” that obstruct talks instead of advancing them.

Speaking during the event, Israeli Minister of Strategic Affairs, Yuval Steinitz, said it is true differences and tension exist between Israel and the United States regarding the deadlock in direct Palestinian-Israel talks, but affirmed the strong ties between the two countries.

Israel was supposed to implement the fourth and final stage of releasing veteran detainees on March 28 as part of an American mediation that helped start direct talks nine months ago.

On Tuesday, at dawn, [December 31, 2013] Israel released 26 veteran Palestinian detainees, as part of the third phase of releasing all detained Palestinians held since before the first Oslo peace agreement in 1993.