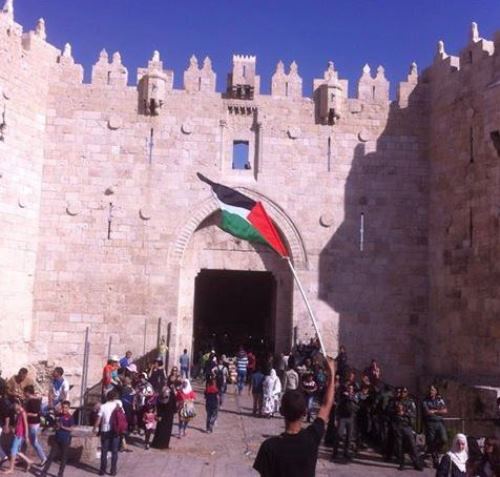 WAFA added that the soldiers surrounded the Palestinian nonviolent protesters, while dozens of mounted police officers were also deployed in the area, especially close to the Walls of the Old City of occupied Jerusalem.

Clashes were also reported in different parts of the occupied West Bank, while the army shot and killed two Palestinians near the central West Bank city of Ramallah, and wounded several others.

The two slain Palestinians have been identified as Nadim Nuwwara, 17, and Mohammad Abu Thaher, 20.

In Hebron, in the southern part of the occupied West Bank, at least eleven Palestinians have been shot and injured by Israeli army fire, and dozens suffered the effects of tear gas inhalation, after the army attacked Palestinian protesters marking the Nakba, in the Bab az-Zaweya and the ash-Shallala streets of the city.

Medical sources said the eleven Palestinians were shot with rubber-coated metal bullets, while one of them, identified as Ali Abu Hamdiyya Gheith, 17, was moderately injured after being shot in his eye, and was moved to the Al-Ahly Hospital in the city.

Several residents were moved to the Hebron Governmental Hospital due to the severe effects of tear gas inhalation, while the rest received treatment by local medics.