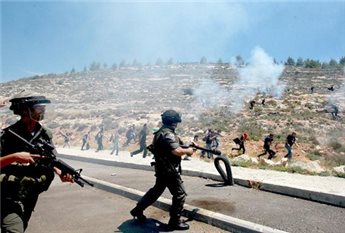 Palestinians commemorated, today, the 66th anniversary of the Nakba (Catastrophe) of 1948, by participating in a series of nonviolent actions in the West Bank, the Gaza Strip, pre-1948 occupied lands and diasporas.For the first time since 2007, Palestinian political factions organized joint rallies to mark the mass displacement of over 700,000 Palestinians in the conflict surrounding Israel’s creation, according to Ma’an.

Some kindergarteners in Gaza celebrated the day by marching in the streets and carrying pictures of their home lands, Al Ray reports:

‘The principal of the kindergarten is very interested in commemorating this day so that children could recognize their occupied lands,’ said Maysara al-Shiekh, head of kindergarten education.

She explained that teachers and students commemorated this day by telling the children about their Palestinian villages and towns, drawing pictures, singing national songs and many others activities.

The British Foreign Minister Lord Balfour promised, on November 2, 1917, to give Jews a national homeland to be established on the land of Palestine, Al Ray continues, ‘a promise of who doesn’t own to those who don’t deserve’.

By 2010, the UN had designated nearly 5 million Palestinians with official refugee status. They are the largest refugee group on the planet.

Since the Balfour Declaration, more than 7 million Palestinians have been made refugees and thousands killed, via a deceptively slow and systematic process of ethnic cleansing and genocide, cyclic proxy war, defamation tactics and illegal settlement expansion, as well as direct sabotage of the livelihood and standard of living of Palestinians through economic siege and sanction on basic amenities, destruction and confiscation of housing, personal property and farmland — even for those Palestinians holding Israeli citizenship.

The Balfour Declaration instantly changed the fate of Palestine and heralded, for the nationalist movement, the deliberate expulsion of Palestinians from their homeland, which continues until this very day.

See IMEMC report: ‘Balfour, A Promise Of Bloodshed And Massacres’, via link below. 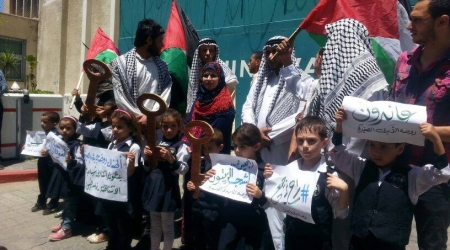