Lieberman: “Israel Has An Alternate Plan For Peace” 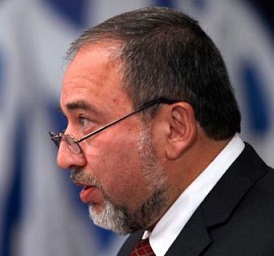 [Saturday, May 17, 2014] Israeli Foreign Minister Avigdor Lieberman stated that his Ministry has an alternate plan to use following the collapse of direct talks with the Palestinians, and that he presented his plan to Israeli Prime Minister, Benjamin Netanyahu. Lieberman said the time has not come for officially presenting his “alternate plan”, but it could be presented, later on, depending on developments, the Ma’an News Agency has reported.

Speaking to Israel’s Channel 2, Lieberman alleged that Palestinian President, Mahmoud Abbas, became an obstacle, as he “failed to be a partner in peace”, and it became “impossible to reach a compromise with him”.

Lieberman further stated that Israel should be holding talks with Palestinian businessmen who reject Hamas, adding that many businessmen, in the West Bank and abroad, “can be talked to and are willing to discuss plans”.

The official, a settler himself living in an illegal settlement in the West Bank, said there are differences in stances between the United States and Israel, and added that “even close friends differ, and commit mistakes”.

“The Americans are mistaken, especially when it comes to Israel’s settlement activities,” Lieberman stated. “They were also mistaken when the forced Israel to accept the Hamas rule after the Palestinian elections of 2006.”

Lieberman, who chairs Israel Our Home fundamentalist party, and once a member of the extreme, Israeli-outlawed Kach movement, served several positions in Israel and its Knesset.

He was also known for his statements against the Arabs in the country, considering them a “strategic threat” to Israel, and sometimes describing them as a “demographic threat”, in addition of his calls for “transferring the Palestinians” to Arab countries, and other smaller parts in Palestine.