Mashal: “Palestinian Reconciliation, Not An Alternative To Resistance” 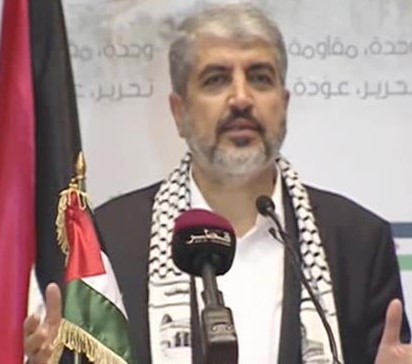 [Tuesday, May 20, 2014] Head of the Political Bureau of the Hamas movement, Khaled Mashal, stated that Palestinian reconciliation and national unity are not alternatives to the legitimate resistance against the Israeli occupation, but are meant to strengthen it.His statements came in a speech he gave in Doha- Qatar, during a commemoration of the 66th Anniversary of the Palestinian Nakba, when Israel was created in the historic land of Palestine after destroying hundreds of villages and towns and displacing hundreds of thousands of Palestinians.

He said that Palestinian reconciliation is urgently needed, especially amidst the current developments, and that the Palestinians “need a unified Palestinian decision and leadership in order to achieve their aspirations of liberty and independence.”

Mashal added that the Palestinians managed to overcome the difficult era of internal divisions and conflicts, despite all obstacles and challenges, and that the Hamas movement has always been interested in reconciliation, but “its efforts were also struck by Israel and American obstacles”.

The Hamas leader also stated that this reconciliation agreement came after “Hamas provided concessions”, and “will always be willing to provide further concession for the sake of Palestinian unity.”

“When the Palestinians commemorate the Nakba, they also renew their commitment to resistance against the occupation, to their struggle for the Right of Return of the refugees and the liberation of their country,” Mashal added. “Politics and resistance are not at odds, the Palestinians will never accept a self-rule government, or a miniature state, they will continue to fight for independence.”

He also said that “Israel’s crimes are now exposed to the international community”, and that “the world sees Israel’s terrorism, its assassinations, murder, expulsion of the Palestinians from their homelands, and its ongoing violations of International law.”

“Commemorating the Nakba is not about renewing the suffering, the pain,” Mashal stated. “It is about renewing and boosting resistance against the occupation, to liberate Palestine, and ensure the return of the refugees.”