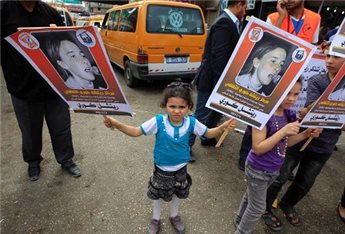 The Israeli Supreme Court heard the appeal, Wednesday, by the parents of US activist Rachel Corrie, who was crushed to death by an Israeli army bulldozer in 2003.
An Israeli court in 2012 cleared the army of any responsibility for Corrie’s death, rejecting a civil suit filed by the family, Ma’an reports. The ruling sparked an angry reaction from the family and the international community and Rachel’s mother, Cindy, accused the Israeli authorities of a cover-up.

‘I think they’ve set a very low threshold in terms of what would be considered negligence, and just ignored the lack of a credible and thorough investigation,’ said Rachel’s father, Craig.

‘If you take (all the material for the appeal) together, what you have is a mechanism that allows the Israeli military to act with impunity,’ he told journalists before the hearing.

‘As an ex-soldier myself I think that’s very dangerous.’

Cindy Corrie: ‘I think there are very important decisions that this court needs to make that impact far more than Rachel.’

It was unclear when the Supreme Court would rule on the appeal, according to Ma’an.

23-year-old Rachel Corrie was killed by a military bulldozer in Rafah, in the southern Gaza Strip, on March 16, 2003.