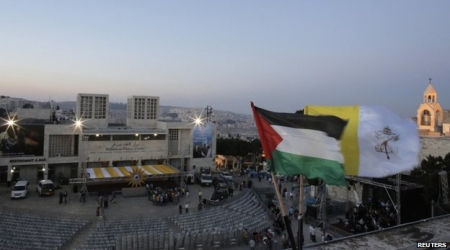 Israeli authorities have allowed 660 Christians from Gaza to see Pope Francis, on Sunday, in the occupied West Bank city of Bethlehem.According to Al Ray, the Ministry of Interior has reported that dozens of Christians left Gaza on Friday, via Erez crossing, in the northern Gaza Strip, saying that new waves are to leave Gaza in few days for the same purpose.

Permits are valid for one week only and to be distributed to Christians of over 35 years of age only.

Gaza is home to only some 1,500 Christians out of an overwhelmingly Muslim population of 1.8 million people, Al Ray reports. Most of these Christians are Greek Orthodox, with only about 130 devoted to Roman Catholicism.

In related news, a Palestinian clerk has urged officials to inform the Pope about Israel’s illegal violations against the hunger-striking Palestinian detainees in Israeli prisons who are currently engaged in a massive protest against the so-called ‘Administrative Detention’, in which Palestinian prisoners are held under harsh conditions without charge or trial, and under ‘secret evidence’ that is never revealed to the prisoner nor their lawyer, and may or may not even exist.

Pope Francis is expected to pray at the Western Wall, on Monday, and will be laying a wreath at the grave of Theodor Herzl, the internationally recognized founding father of Zionism.