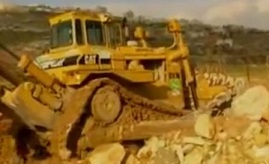 [Monday, May 26, 2014] Even before the Pope concluded his visit to the Holy Land, calling for peace and justice, the Israeli Construction and Planning Committee of the Jerusalem City Council approved the construction of 50 new units in the Jabal Abu Ghneim (Har Homa) illegal settlement, near occupied Jerusalem.Israeli sources said the plan is to construct five buildings in the Homat Shmuel Street; each building would include 10 units, in 5 to 6 floors.

Jerusalem City Council member, Pepe Alalu of Meretz Party, the told the Walla Israeli News Agency that continuing the construction in “Har Homa” is a message that Israel is not interested in reaching peace with the Palestinians.

Alalu added that the City Council in Jerusalem continues to build beyond the Green Line in an attempt to foil direct negotiations with the Palestinians.

According to +972 mag Israeli Prime Minister Benjamin Netanyahu recently boasted of his settlement building achievements in a recent meeting with young Likud supporters. Responding to a question from the audience, Netanyahu said: “I was threatened in Washington: ‘not one brick’ [of settlement construction] … after five years, we built a little more than one brick…”

Asked “about peace talks with the Palestinians,” Netanyahu reportedly replied, “about the – what?” to which the audience responded by breaking out into laughter.

Abu Ghneim settlement, referred to by Israel as Har Homa, was built on Abu Ghneim Mountain owned by the Palestinians, near Beit Sahour, in the West Bank district of Bethlehem. Israel considers it a “neighborhood” of occupied Jerusalem.

The area was illegally annexed by Israel to fall under the jurisdiction of Jerusalem; it is part of the occupied Palestinian territories that fell under illegitimate Israeli occupation following the June 1967 six-day war.

Israeli settlements in the occupied West Bank and occupied East Jerusalem violate International Law and the Fourth Geneva Convention, to which Israel is a signatory.