Pope Meets Grand Mufti Of Jerusalem In The Al-Aqsa Mosque 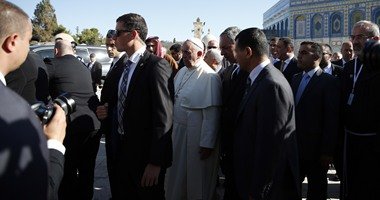 His holiness Pope Francis met on Monday [May 26, 2014] the Grand Mufti of Occupied Jerusalem and the Holy Land, Sheikh Mohammad Hussein, and various Jerusalemite Islamic and Christian leaders.He arrived at the Al-Aqsa Mosque from its eastern gate, and visited the Dome of the Rock along with Prince Ghazi Bin Mohammad, special adviser to King Abdullah of Jordan, and various Palestinian figures, headed by the Grand Mufti.

The Mufti thanked the Pope for his stances regarding the Palestinian refugees, and their Right of Return, adding that he hopes Pope Francis would act on ensuring the release of all detainees held by Israel and facing ongoing aggression and violations.

“Achieving peace requires true regional, national and international actions on the ground, the Palestinian people are struggling for liberation and independence,” he added. “They seek their right to establish their independent State, with Jerusalem as its capital. We want peace based on justice, mutual respect and the return of all legitimate rights.”

The Mufti also said Jerusalem is the capital of Palestine, the political and spiritual capital, and that Israeli soldiers and settlers are ongoing with its violations against the al-Aqsa Mosque and the holy sites,

“Israel is preventing the Muslims from Gaza and the West Bank from entering the mosque to pray,” he stated. “Access to holy sites is one of the basic rights guaranteed by international laws and treaties.”

On his part, the Pope said he came to Palestine to meet Muslims, Christians and Jews, “to hold brotherly talks with all faiths”, and added that Abraham made a pilgrimage for justice and peace, “therefore, we all need to seek peace and justice through worship, for the sake of humanity in the world.”

“From this holy site I salute all faiths in the Holy Land, let us respect and love each other as brothers and sisters,” the Pope added. “Let us understand each other, and work towards peace.”

Earlier in the day, soldiers invaded the yards of the mosque, closed its gates and forced the worshipers out, except for some mosque employees and a few religious leaders, the WAFA news agency said.