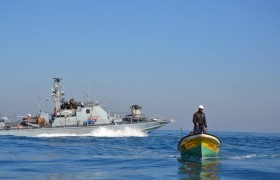 Ashraf al-Qidra, Gaza’s health ministry spokesman, said that 52-year-old Imad Shukri Salim was shot in the hand and the back and was taken to Kamal Adwan hospital for treatment, according to Ma’an.

There are some 4,000 fishermen in Gaza. According to a 2011 report by the International Committee of the Red Cross, 90 percent of them are impoverished — a 40 percent increase from 2008, due to Israeli-imposed limits on the industry.

As part of the ceasefire agreement of November 2012, Israel allowed Palestinians to fish within six nautical miles, but unilaterally decreased the allotted area to three miles.