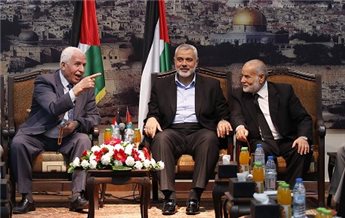 According to a statement by a senior Fatah official, Faisal Abu Shahla, on Thursday afternoon, a government of national consensus would be decided upon and made public in the coming hours, as negotiators attempt to work out the last of disagreements from both sides. However, Hamas spokesman Sami Abu Zuhri said on Thursday, as well, that ongoing negotiations could potentially need ‘several days’ to be finalized.

Additionally, U.S. President Barrack Obama has also made a recent statement, in regard to American support of a Palestinian state.
Earlier Thursday, Ma’an reports that Palestinian President Mahmoud Abbas has announced that current premier Rami Hamdallah would officially serve as the prime minister in the national unity government.

When announced, it will mark a reconciliation which aims to end seven years of political division between the largest Palestinian parties.

Palestinian officials said that the announcement of the lineup was held up over the foreign affairs portfolio, according to Ma’an.

In related news, U.S. president Barrack Obama, in a letter sent to Abbas, appears to affirm a U.S. commitment for the establishment of a Palestinian state which coexists in peace alongside the state of Israel.

“It was a pleasure to welcome you to the white house in March, and I send my thanks for your kind gifts,” said Obama, according to WAFA Palestinian News & Info Agency.

“As I emphasized during our meeting, the United States remains deeply committed to a negotiated outcome between Palestinians and Israelis that result in an independent, viable, and contiguous Palestinian state living in peace alongside the state of Israel,” he stressed.

The letter concluded: “I am hopeful we can continue to work closely together to achieve this goal and further strengthen the bonds between our two people.”