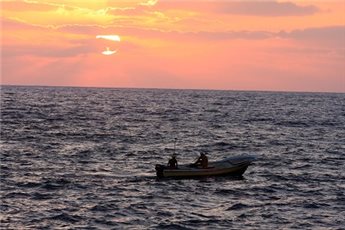 Another Palestinian fisherman has been shot and injured by Israeli forces off the northern Gaza Strip, according to medical officials. Also on Friday, a car belonging to a Jewish settler was hit by ‘small arms fire’ while traveling in the central West Bank, according to Israeli military sources.Ma’an reports that spokesman for the Gaza ministry of health, Ashraf al-Qidra, said that a 22-year-old Palestinian fisherman was injured after Israeli naval forces deployed off of the al-Sudaniya shore in northern Gaza city opened fire at his boat.

Ashraf was taken to Kamal Adwan hospital, following the incident, where his injury was reported as ‘moderate’. The Israeli military did not immediately return calls in inquiry to the incident.

Reports of Israeli forces shooting at Gaza fisherman who stray ‘too far’ from the shore are becoming increasingly frequent.

Israeli navy forces abducted, just this Wednesday, three fishermen working off the Rafah coast, in the southern Gaza Strip. Additionally, the Organization of Islamic Cooperation has recently released a report stating that life in the Gaza Strip has become unbearable due to the imposed siege and the closure of crossings: https://imemc.org/article/67951

Gaza has been severe blockade imposed by Israel and enforced by Egypt since 2007. Palestinian fishermen are only allowed to go three nautical miles from Gaza’s shore, even though the previous agreement settled on 20 nautical miles.

Ma’an reports that there are 4,000 fishermen in Gaza and, according to a 2011 report by the International Committee of the Red Cross 90 percent are ipoverished — an increase of 40 percent from 2008.

The economic crisis is a direct result of Israeli disenfranchisement of the fishing industry.

In the West Bank, on Friday afternoon, Ma’an reports that a car belonging to a Jewish-Israeli settler was hit by ‘small arms fire’ while traveling in the central West Bank.

The shots hit the car while it was traveling near the Jewish-only settlement of Geva Benyamin, near the Palestinian village of al-Ram, the army said in a statement.

In occupied East Jerusalem, today, hundreds of Palestinian Muslim worshipers were forced to pray in the streets of Jerusalem’s Old City after Israeli authorities again imposed regulations on worshippers trying to enter the Al-Aqsa mosque compound for noon prayers.

More than 500,000 Israelis live in settlements built across the West Bank, designated ‘Jewish-only’, in direct defiance of international law which prohibits the transfer of civilians from the occupying population onto occupied territory.

Many of the so-called ‘settlements’ have been built directly on lands which have been confiscated from local Palestinian communities, with roads and other facilities being constructed for exclusive Jewish use.