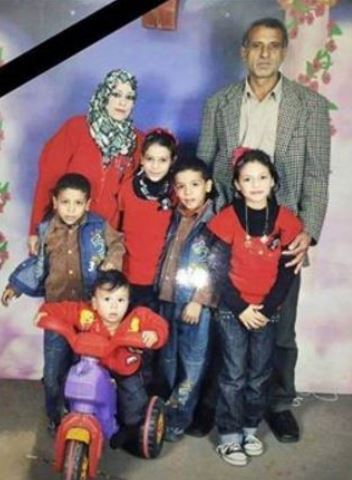 Shortly after Israel targeted, again, Palestinian hospitals and medical centers, the Israeli Army fired more shells and missiles into homes and residential towers in the Gaza Strip killing scores of Palestinians.Update: 03:23 Tuesday: One Palestinian, identified as Abdullah Ismael al-Baheessy, 27, was killed as the army bombarded Deir al-Balah, in Central Gaza, and several Palestinians were injured.

Medical sources in Gaza said medics are rescue teams aren’t even able to locate remains of many Palestinians, buried under the rubble of bombarded buildings, especially since the army is not even allowing rescue teams and medics to perform their duties, and is ongoing with its attacks against them.

The Ministry of Health in Gaza stated that resident Mohammad Abu Sabha, 55, was killed, and thirteen family members were wounded, when the army fired a missile into their home, in Abasan al-Kobra town, in Khan Younis, in the southern part of the Gaza Strip.

In Gaza city, an entire Palestinian family, that also holds German Citizenship, was killed, and at least 75 Palestinians were injured, some seriously, after the army bombarded the Salaam Residential Tower in the center of the city, on Monday evening.

The Israeli missile struck the fourth and fifth floors of the tower, adjacent to the Esar’ Tower, and was previously hit by Israeli shells. Eleven Palestinians were killed, dozens injured.

The Ministry of Health in Gaza also said that two Palestinians were killed, and several others were injured in the Shuja’eyya neighborhood, in Gaza, on Monday evening.

Sixty Palestinians, mainly women and children, were injured by Israeli missiles targeting homes in the Shaty’s refugee camp, west of Gaza City. Some of the wounded are in critical conditions.

Also on Monday evening, at least 15 Palestinians were injured, some seriously, when the army fired artillery shells into the neighborhoods of Shuja’eyya, Zeitoun, and Tuffah, east and southeast of Gaza City, and in addition to Beit Lahia, Beit Hanoun, and Jabalia, in the northern part of the Gaza Strip.

On Monday at night, the Ministry of Health said that eight Palestinians were injured by Israeli missiles, striking homes in Khan Younis, some of the wounded suffered serious injuries.

The wounded were moved to a number of hospital, while medical sources said the number of casualties could be might higher as rescue efforts are hindered due the deliberate targeting of medical teams and journalists.

Israeli bombardment of the Al-Salaam residential tower in Gaza City, just before 9 pm on Monday, has resulted in the deaths of 11 residents, and wounded more than 35. The airstrike resulted in the death of a father and his four children – two sons and two daughters, all of whom were under 12.

Those killed in the al-Salaam tower bombing have been identified as:

Also, in Khan Younis Monday evening, the Palestinian Ministry of Health has reported the death of:
Fadi Bashir al-Ablala, 22

The Palestinian Ministry of Health has reported that eight bodies have arrived at Shifa Hospital from the al-Qassas family, four of them children, around 5 pm on Monday, July 21st. Medical staff are working to identify the names of all of those killed.

Three members of the Siyam family were also killed in an airstrike in Gaza City Monday afternoon. They were identified as:
7. Aliya Siyam
8. Fayza Sabr Siyam
9. Samia Siyam

Medical staff are still working to identify the other two people who were killed in the attack on Khan Younis.

An airstrike on a home in Rafah, on Friday, late in the afternoon, killed a woman and seriously wounded a second person. The woman killed was identified as:
16. Fatima Ahmad al-Arja

Medical sources report three bodies brought to the hospital in Rafah after Israeli airstrikes, but the identities of the other two have not yet been confirmed.

In Jabalia, a Palestinian was killed in heavy Israeli shelling of the town. He was identified as:
17. Atiya Yusef Dardouna, 26

Unconfirmed reports at 8:50 pm, in Gaza City, of a building destroyed by an Israeli airstrike, with five people buried in the rubble, presumed killed, and at least 35 injured. The building is located next to Al Israa’ Tower in Gaza City.