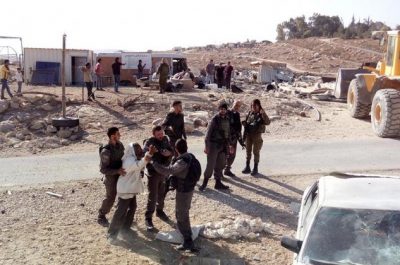 The aforementioned boy was wounded then dozens of Palestinian civilians gathered at the northern entrance to Birzait village, north of Ramallah, to organize a protest marking the 12th death anniversary of Yasser Arafat. The protestors threw stones at the Israeli soldier, who were present in the area.

On 11 November 2016, Majdi Jom’a (13) was hit by a tear gas canister to the right leg during the Kufr Qaddoum weekly protest, northeast of Qalqilya.

On 10 November 2016, Israeli forces moved into Yatta, south of Hebron. They raided a house belonging to the family of Zain Awad (24) and started closing a room of an old house, in which Zain used to live.

It should be noted that Zain has been abducted by Israeli forces since 09 June 2015 under the pretext of being engaged in offering help to Palestinians from al-Makhamra family from the same city, who carried out a shooting attack in Tel Aviv in June 2015 that resulted then in the killing of 3 Israelis.

During the reporting period, Israeli forces conducted at least 64 military incursions into Palestinian communities in the West Bank and 6 others in occupied Jerusalem and its suburbs. During these incursions, Israeli forces abducted at least 57 Palestinian civilians, including 15 children and a woman. Fifteen of them, including 12 children and the woman, were abducted in occupied Jerusalem.

On 16 November 2016, Israeli forces raided the Health Improvement Program’s office in Ramallah and damaged its content. They then confiscated some contents and withdrew later.

On Sunday morning, 13 November 2016, Ja’abis family self-demolished 2 residential apartments in al-Mokaber Mount, southeast of Jerusalem, in implementation of the Israeli District court under the pretext of building without a license.

On the same day, two Palestinian traders namely Mohammed al-Najar and Nedal Gheith, self-demolished their shops in Beit Hanenah neighbourhood in implementation of the Israeli municipality decision under the pretext of building without a license.

On Tuesday, 15 November 2016, Israeli municipality bulldozers demolished a 200-square-meter barrack for horses and 15-square-meter agricultural rooms belonging to ‘Alaa’ Shweiki in al-Thawri neighbourhood in Silwan village, south of East Jerusalem’s Old City, under the pretext of building without a license.

On the same day, the municipality bulldozers demolished the foundations of Um al-Qora Mosque in Sour Baher village, southeast of East Jerusalem, under the pretext of building without a licence.  They also demolished a barrack in the same area.

In the context of targeting Palestinian fishermen, on 10 November 2016, Israeli gunboats stationed in the sea opened fire at Palestinian fishing boats sailing within 6 nautical miles. Neither casualties nor material damage were reported.

At approximately 01:00 on Wednesday, 16 November 2016, the Israeli authorities released Ammar while kept his brother and the boat in custody.

On 16 November 2016, Israeli gunboats opened fire at Palestinian fishing boats sailing within 5 nautical miles off al-Sudaniya shore, west of Jabalia, north of the Gaza Strip. No casualties were reported.

On 14 November 2016, Israeli forces demolished 28 stores in al-‘Oja village, north of Hebron belonging to Jamal Freijat (51). Six of these stores were roofed while the rest were still under-construction.

Clashes occurred between civilians and Israeli forces, who fired tear gas canisters and sound bombs.  As a result, the aforementioned civilian suffered tear gas inhalation and his condition was described as serious.

On Tuesday, 15 November 2016, Israeli forces accompanied with a vehicle belonging to the Israeli Construction and Organization Department and bulldozer moved into Kherbet Um al-Kheir, southeast of Yatta.

They demolished Um al-Kheir Social Centre, which was only built of pillars and a shader cloth by the residents on the rubbles of the centre demolished months ago under the pretext of building without a license.

During the past week, Israeli troops engaged in the use of excessive force against peaceful demonstrations protesting settlement activities and the construction of the annexation wall

At approximately 09:30 on Thursday, 10 November 2016, dozens of Palestinians gathered at the northern entrance to Birzeit village (Atarah Bridge), north of Ramallah, to organize a protest commemorating the 12th anniversary of the death of the late President Yasser Arafat.

The protesters threw stones at the Israeli soldiers, who immediately fired live bullets and metal bullets in response. As a result, Anas Mohammed Jaber Zaid (15), from al-Jalazoun refugee camp, sustained wounds. The Israeli soldiers then abducted him and took him to an unknown destination.

At approximately 13:15, on Friday, 11 November 2016, Palestinian civilians and international solidarity activists organized a protest in the center of Kafer Qadoum village, northeast of Qalqiliya, and then made their way to the eastern entrance of the village in protest against closing that entrance since the beginning of al-Aqsa Intifada with an iron gate.

When the protesters approached the entrance, Israeli forces fired live bullets, sound bombs and tear gas canisters at them. As a result, Majdi Majed Abdul Mo’men Jom’ah (13) was hit with a tear gas canister to the right leg.

They also chased the protesters into olive fields and houses.  As a result, many of the protesters suffered tear gas inhalation while others sustained bruises as Israeli soldiers beat them up.

At approximately 2:00 pm following Friday prayer, 11 November 2016, dozens of Palestinian civilians made their way to the border fence between the Gaza Strip and Israel, east of al-Buraij in the central Gaza Strip, to participate in activities supporting Jerusalem.

They threw stones at the Israeli soldiers, who immediately fired live bullets and tear gas canisters at the protesters in response. As a result, ‘Aref Awad Mohammed Abu Jaber (24) sustained a live bullet wound to the left feet. He then was transported to Al-Aqsa Martyrs Hospital in Deir El-Balah to receive the necessary medical treatment.

As a result, 3 civilians sustained wounds. The wounded were transferred by an ambulance of the Palestinian Red Crescent Society (PRCS) to al-Shifaa’ Hospital in Gaza to receive medical treatment. Their wounds ranged between moderate and minor.

The wounded civilians were identified as: Saed al-Abed Mohammed Eshlash (32). He sustained a live bullet wound to the leg and his injury was classified as minor; Mousa Monther Fathi Abu Dalal (19).

Due to the number and severity of Israeli human rights violations this week, the Palestinian Center for Human Rights (PCHR) made several recommendations to the international community.

In addition, the PCHR calls upon the Parties to international human rights instruments, especially the Covenant on Civil and Political Rights and the Covenant on Economic, Social and Cultural Rights, to pressure Israel to comply with their provisions in the Occupied Palestinian Territories, and to compel it to incorporate the human rights situation in the Occupied Palestinian Territories in its reports submitted to the concerned committees