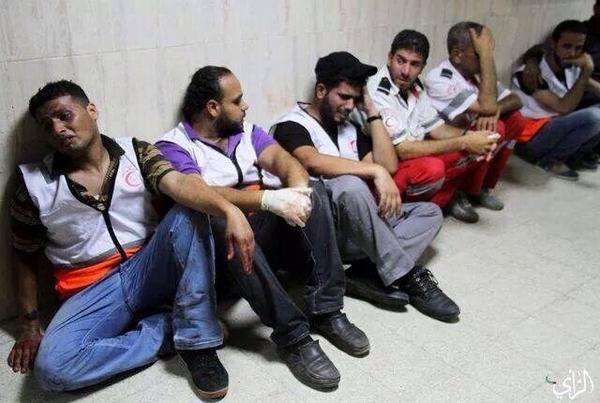 On Thursday, a group of 24 doctors and scientists signed an open letter that was published in the Lancet Medical Journal in Great Britain, in support of the people of Gaza.The letter reads as follows:

An open letter for the people in Gaza

We are doctors and scientists, who spend our lives developing means to care and protect health and lives. We are also informed people; we teach the ethics of our professions, together with the knowledge and practice of it. We all have worked in and known the situation of Gaza for years.

On the basis of our ethics and practice, we are denouncing what we witness in the aggression of Gaza by Israel.

We ask our colleagues, old and young professionals, to denounce this Israeli aggression. We challenge the perversity of a propaganda that justifies the creation of an emergency to masquerade a massacre, a so-called “defensive aggression”. In reality it is a ruthless assault of unlimited duration, extent, and intensity. We wish to report the facts as we see them and their implications on the lives of the people.

We are appalled by the military onslaught on civilians in Gaza under the guise of punishing terrorists. This is the third large scale military assault on Gaza since 2008. Each time the death toll is borne mainly by innocent people in Gaza, especially women and children under the unacceptable pretext of Israel eradicating political parties and resistance to the occupation and siege they impose.

This action also terrifies those who are not directly hit, and wounds the soul, mind, and resilience of the young generation. Our condemnation and disgust are further compounded by the denial and prohibition for Gaza to receive external help and supplies to alleviate the dire circumstances.

The blockade on Gaza has tightened further since last year and this has worsened the toll on Gaza’s population. In Gaza, people suffer from hunger, thirst, pollution, shortage of medicines, electricity, and any means to get an income, not only by being bombed and shelled. Power crisis, gasoline shortage, water and food scarcity, sewage outflow and ever decreasing resources are disasters caused directly and indirectly by the siege.1

People in Gaza are resisting this aggression because they want a better and normal life and, even while crying in sorrow, pain, and terror, they reject a temporary truce that does not provide a real chance for a better future. A voice under the attacks in Gaza is that of Um Al Ramlawi who speaks for all in Gaza: “They are killing us all anyway—either a slow death by the siege, or a fast one by military attacks. We have nothing left to lose—we must fight for our rights, or die trying.”2

Gaza has been blockaded by sea and land since 2006. Any individual of Gaza, including fishermen venturing beyond 3 nautical miles of the coast of Gaza, face being shot by the Israeli Navy. No one from Gaza can leave from the only two checkpoints, Erez or Rafah, without special permission from the Israelis and the Egyptians, which is hard to come by for many, if not impossible. People in Gaza are unable to go abroad to study, work, visit families, or do business. Wounded and sick people cannot leave easily to get specialised treatment outside Gaza. Entries of food and medicines into Gaza have been restricted and many essential items for survival are prohibited.3 Before the present assault, medical stock items in Gaza were already at an all time low because of the blockade.3 They have run out now. Likewise, Gaza is unable to export its produce. Agriculture has been severely impaired by the imposition of a buffer zone, and agricultural products cannot be exported due to the blockade. 80% of Gaza’s population is dependent on food rations from the UN.

Much of Gaza’s buildings and infrastructure had been destroyed during Operation Cast Lead, 2008—09, and building materials have been blockaded so that schools, homes, and institutions cannot be properly rebuilt. Factories destroyed by bombardment have rarely been rebuilt adding unemployment to destitution.

Despite the difficult conditions, the people of Gaza and their political leaders have recently moved to resolve their conflicts “without arms and harm” through the process of reconciliation between factions, their leadership renouncing titles and positions, so that a unity government can be formed abolishing the divisive factional politics operating since 2007. This reconciliation, although accepted by many in the international community, was rejected by Israel. The present Israeli attacks stop this chance of political unity between Gaza and the West Bank and single out a part of the Palestinian society by destroying the lives of people of Gaza. Under the pretext of eliminating terrorism, Israel is trying to destroy the growing Palestinian unity. Among other lies, it is stated that civilians in Gaza are hostages of Hamas whereas the truth is that the Gaza Strip is sealed by the Israelis and Egyptians.

Gaza has been bombed continuously for the past 14 days followed now by invasion on land by tanks and thousands of Israeli troops. More than 60 000 civilians from Northern Gaza were ordered to leave their homes. These internally displaced people have nowhere to go since Central and Southern Gaza are also subjected to heavy artillery bombardment. The whole of Gaza is under attack. The only shelters in Gaza are the schools of the UN Relief and Works Agency for Palestine Refugees in the Near East (UNRWA), uncertain shelters already targeted during Cast Lead, killing many.

According to Gaza Ministry of Health and UN Office for the Coordination of Humanitarian Affairs (OCHA),1 as of July 21, 149 of the 558 killed in Gaza and 1100 of the 3504 wounded are children. Those buried under the rubble are not counted yet. As we write, the BBC reports of the bombing of another hospital, hitting the intensive care unit and operating theatres, with deaths of patients and staff. There are now fears for the main hospital Al Shifa. Moreover, most people are psychologically traumatised in Gaza. Anyone older than 6 years has already lived through their third military assault by Israel.

The massacre in Gaza spares no one, and includes the disabled and sick in hospitals, children playing on the beach or on the roof top, with a large majority of non-combatants. Hospitals, clinics, ambulances, mosques, schools, and press buildings have all been attacked, with thousands of private homes bombed, clearly directing fire to target whole families killing them within their homes, depriving families of their homes by chasing them out a few minutes before destruction. An entire area was destroyed on July 20, leaving thousands of displaced people homeless, beside wounding hundreds and killing at least 70—this is way beyond the purpose of finding tunnels. None of these are military objectives. These attacks aim to terrorise, wound the soul and the body of the people, and make their life impossible in the future, as well as also demolishing their homes and prohibiting the means to rebuild.

Weaponry known to cause long-term damages on health of the whole population are used; particularly non fragmentation weaponry and hard-head bombs.4, 5 We witnessed targeted weaponry used indiscriminately and on children and we constantly see that so-called intelligent weapons fail to be precise, unless they are deliberately used to destroy innocent lives.

We denounce the myth propagated by Israel that the aggression is done caring about saving civilian lives and children’s wellbeing.

Israel’s behaviour has insulted our humanity, intelligence, and dignity as well as our professional ethics and efforts. Even those of us who want to go and help are unable to reach Gaza due to the blockade.

This “defensive aggression” of unlimited duration, extent, and intensity must be stopped.

Additionally, should the use of gas be further confirmed, this is unequivocally a war crime for which, before anything else, high sanctions will have to be taken immediately on Israel with cessation of any trade and collaborative agreements with Europe.

As we write, other massacres and threats to the medical personnel in emergency services and denial of entry for international humanitarian convoys are reported.6 We as scientists and doctors cannot keep silent while this crime against humanity continues. We urge readers not to be silent too. Gaza trapped under siege, is being killed by one of the world’s largest and most sophisticated modern military machines. The land is poisoned by weapon debris, with consequences for future generations. If those of us capable of speaking up fail to do so and take a stand against this war crime, we are also complicit in the destruction of the lives and homes of 1·8 million people in Gaza.

We register with dismay that only 5% of our Israeli academic colleagues signed an appeal to their government to stop the military operation against Gaza. We are tempted to conclude that with the exception of this 5%, the rest of the Israeli academics are complicit in the massacre and destruction of Gaza. We also see the complicity of our countries in Europe and North America in this massacre and the impotence once again of the international institutions and organisations to stop this massacre.