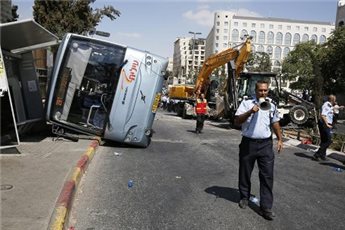 A Palestinian man was shot dead by Israeli police, in occupied Jerusalem, in what they claim is an attack the man carried out against an Israeli bus and a car with an industrial digger that he was driving.Update: 15:17: The Palestinian digger driver who was shot by the police has been identified as Mohammad Nayef Ja’abeess.

Update: 14:22 ~ Israeli Daily Haaretz has reported that a pedestrian who was injured in the incident died of his wounds. Five persons were lightly wounded.

The accident took place in Sheikh Jarrah, in occupied Jerusalem.

The bus that was struck by the digger overturned, and the Palestinian driver of the industrial digger was shot dead while behind the wheel.

The Israeli Police and various Israeli media agencies are saying the accident was “a deliberate attack”.