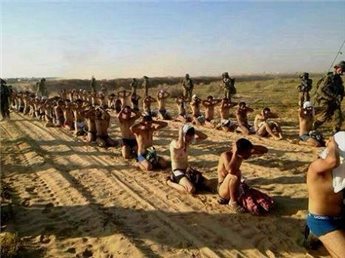 Minister of Prisoner’s Affairs Shawqi al-Ayasa has stated that no information has been received concerning a number of Palestinians detained in Gaza over the course of Israel’s offensive on the region.’The occupation army, during its current aggression on the Gaza Strip, has detained dozens of Palestinians and taken them to unknown locations,’ he said on Wednesday, further adding that the ministry still waits to receive crucial information about the prisoners, including their ID numbers, locations, and conditions.

According to Ma’an News Agency, the minister expressed worrying concerns with note to ‘growing fears that some of the prisoners have been executed.’

Although some prisoners have been released, and the Israeli army has issued a number of vague statements in regard to the subject of detainees, the actual statistcs remain unclear.

Mr. Al-Ayasa has called on international organizations and, specifically, the International Committee of the Red Cross to intercede in obtaining the information.

Furthermore, the minister has requested that families who suspect their relatives have been taken captive contact the Ministry of Prisoner Affairs.