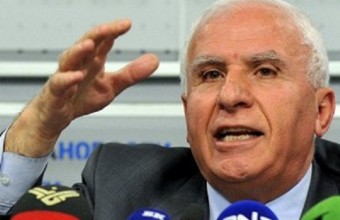 Member of Fatah’s Central Committee and head of the Palestinian delegation for truce talks in Cairo, Azzam Al-Ahmad, says that Palestinians do not wish to resume attacks, but that it is their legitimate prerogative to demand and fight for their rights.According to the Palestinian News Network (PNN), Mr. Al-Ahmad additionally stated that Palestinians are ready to continue talks in Egypt and to come to a final agreement which meets their demands, including an end to the ongoing blockade in the Gaza Strip. He further stated that the children of Gaza have the right to live in dignity, and to attend schools and playgrounds without living in fear of Israeli airplanes flying overhead.

Al-Ahmad criticized the lack of activity on the part of the international community, stressing that Palestinian civilians are the ones truly paying the price — not the Israelis.

The official stated that the coming hours are critical to reaching an agreement, noting that Palestinian demands are clear and cannot be excluded from negotiating table, especially those regarding the building of sea and air ports in the Gaza Strip.

According to Al-Ahmad, the beieged coastal region once had an operative airport in which planes used to land with Israel’s consent, as was agreed upon with the signing of the Oslo accords. This airport closed in 2001, after being attacked and severely damaged by Israeli army, PNN notes.

The demands of the Palestinian delegation are not new, the official stated, as they encompass the basic rights of the Gazan community, further stressing that Israel should not have to have the right to say which ones are allowed and which are not.

The meeting of such demands, in Mr. Al-Ahmad’s opinion, would help to achieve an appropriate climate for a political process that would bring an end to the ongoing violence and the bloodshed, as well as implementing resolutions recognized under international law.

He downplayed media-induced perceptions of divisions within the Palestinian delegation, saying that these rumors would be proven false and are, simply, an Israeli strategy to sabotage negotiations.

Negotiations are to continue with Egyptian officials in Cairo. However, an appointment with Director of Egyptian General Intelligence Directorate, Mohammad Ahmed Fareed Al-Tuhami, is yet to make the official schedule.