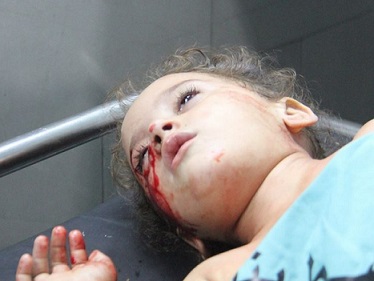 Palestinian medical sources have reported that four Palestinians, including two children, have been killed and dozens injured, after the army fired missiles into several areas in the Gaza Strip. Updated: 14:52 A Palestinian child, identified as Anwar Mustafa Za’anin, 17, died of earlier wound, at the Shifa Medical Center in Gaza.

One Palestinian was seriously injured when the army fired a missile into a car in Beit Hanoun, in the northern part of the Gaza Strip.

The Ministry of Health denied reports of his death, and said the wounded man is in the Intensive Care Unit of a local hospital.

A woman was killed, and her family was injured when the Israeli air force fired a missile into a home in the Bani Soheila area, east of Khan Younis, in the southern part of the Gaza Strip.

The slain woman has been identified as Amani Abed al-Bakara, 35.

Also, a Palestinian child, identified as Ahmad Mohammad Atiyya al-Masri, 14, was killed, and at least three Palestinians were injured, when an Israeli drone fired a missile into Deir al-Balah, in Central Gaza.

The army also fired a missile into a home in al-Meghraqa area, in Central Gaza, destroying it.

More missiles were fired into farmlands in Beit Hanoun, in northern Gaza, in Kherbit al-‘Adas, near Rafah, in southern Gaza, and various areas close to the border with Egypt.

A city council worker was seriously injured when the Israeli air force fired a missile into a car belonging to the Beit Hanoun Municipality.

Medical sources in the Jabalia refugee camp, in northern Gaza, stated that at least 10 Palestinians were injured when the army bombarded a home in the camp.

At least ten Palestinians were injured, two seriously, when the army fired a missile into a home in the Jabalia refugee camp, in northern Gaza.

Late on Saturday at night, a Palestinian Aaya Nour ash-Sha’er, 13, died when an Israeli missile hit her family home in Rafah, in the southern part of the Gaza Strip.

On Saturday, the Ministry of Health in Gaza said around 1920 Palestinians have been killed, and Israeli fire and shells in the Gaza Strip have injured more than 9875, since July 8.