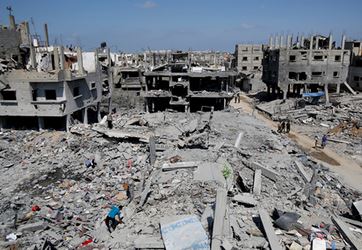 Palestinian medical sources have reported that a wounded Palestinian man died at an Egyptian hospital of serious injuries suffered several days ago when the army bombarded Rafah. Remains of two Palestinians located under rubble in Central Gaza.The sources said Mohammad ar-Roumy, suffered a very serious injury after the Israeli army fired missiles into homes in Rafah, and was later moved to an Egyptian hospital in al-‘Arish.

Also on Monday, medics and rescue teams located the remains of two Palestinians under rubble of bombarded homes in the Gaza Strip.

Medical sources said the number of slain Palestinians, since Israel initiated its latest aggression on Gaza on July 8, arrived to 1944, and more than 9886 Palestinians have been injured.

Most of the casualties are civilians, including infants, children, women and elderly, in addition to dozens of medics and journalists.

In related news, the Ministry of Health in Gaza reported that Israeli missiles and shells have targeted 36 ambulances, since July 8, leading to the death of twelve medics, while many have been injured.