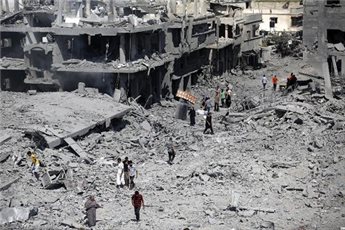 Deputy Secretary-General of the Palestinian faction of the Islamic Jihad, Ziad al-Nakhaala, said Thursday that a long-term ceasefire to include the lifting of the siege on Gaza would be announced soon, stressing that ‘great progress’ had been made in negotiations.According to Ma’an News Agency: ‘The announcement comes after Israel reportedly dropped its demand that Palestinian resistance groups inside Gaza disarm, while apparently acceding to demands by the Palestinian delegation that the eight-year long economic blockade of the Strip be lifted.’

Al-Nakhaala said, additionally on Thursday, that progress has been made in ongoing Cairo negotiations, and that agreements had been reached on the opening of Gaza crossings, which would serve to facilitate the entry of goods, expansion of the fishing zone, and an end to the Israeli imposed ‘security buffer zone’ which encompasses nearly 20 percent of the Gaza Strip’s territory.

Al-Nakhaala also stated, according to Ma’an, that Israel has agreed to commence talks on the re-opening of an airport and seaport in Gaza in a month, among other key demands.

The Israeli ceasefire delegation is to return to Cairo, from Saturday evening until Monday night, to continue talks for a lasting ceasefire.

Search IMEMC: ‘demands’, for a recap on age-old discrepancies between relevant parties.