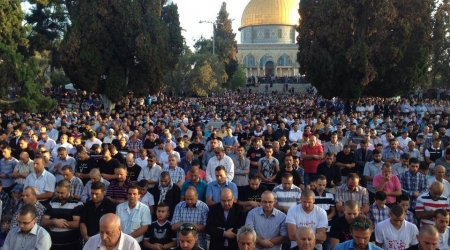 Palestinians chanted “Allahu Akbar (God is Greatest)” in their outrage against the invasion.

Israeli forces again prevented worshippers under the age of 50 from entering the mosque, in a violation of Palestinian freedom which has now become routine, in recent months.

Israeli settlers assaulted two Palestinians in two separate incidents in West Jerusalem, on Sunday, while they were at their place of work, according to media sources.

On Sunday morning, WAFA has reported that a group of settlers assaulted one Palestinian individual while he was at his workplace, all the while chanting anti-Arab slogans, such as ‘death to Arabs’.

Earlier in the night, settlers targeted a Palestinian taxi driver after stopping his car, upon which they verbally assaulted him, beat him and sprayed him with pepper gas.

Over 550,000 colonial settlers now live in continually expanding developments across the region, in contravention of international laws to which Israel is signatory.

At the same time, Palestinians are rarely given building permits, as Israeli settlements continue to divide and disenfranchise Palestinian communities in massive increments. Homes and villages are bulldozed to the ground, leaving entire families displaced; agricultural establishments are damaged or destroyed entirely, turning what remains of Palestinian communities into isolated ghettos, even for those holding Israeli citizenship.

Settler violence against Palestinians and their property is common througout both Israel and the occupied Palestinian territories, often in conjunction with either the failure of police and military to uphold the law or their full-on backing thereof.

On Sunday, at dawn, three Palestinians were abducted during ongoing raids in different parts of the occupied West Bank.

Israeli TV Channel 7 said, according to Al Ray, that the Israeli army arrested a Hamas activist in Hebron, one citizen from Bethlehem and another in Qalqilya.

Security sources said the Israeli forces carried out security check-ins in many neighborhoods in the West Bank.

Clashes between Israeli forces and Palestinian youth were also reported in the village of al-Jalma, in Jenin.

A number of Palestinian citizens suffered from tear gas inhalation, while serving one youth, named Hisham Jarar, with a summons to meet them at Salem military camp.