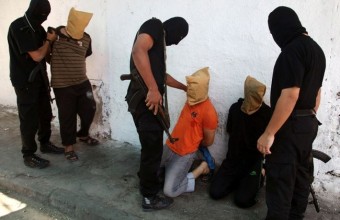 A Palestinian revolutionary court, Friday morning, sentenced 18 people, who had been spying for Israel, to death by firing squad.The group had been caught spying for the benefit of the Israeli regime which has, so far, caused the untimely and horrific deaths of over 2,000 Gaza residents — some 80% of whom were civilians, including over 500 children — during the course of its ongoing military assault across the region.

According to Al Ray Palestinian Media Agency, the deaths occurred with the help of collaborators, without any legal evidence of the victims committing even a simple misdemeanor.

The Palestinian News Network (PNN) has reported that this now brings the number of alleged informants executed in the past two days to 21, and includes several people who were arrested, yesterday, in connection with the killing of three senior Hamas commanders and a number of family members by Israeli forces.

Anne FitzGerald, Amnesty International’s Director of Research and Crisis Response, was quoted to say, in response: “This flurry of executions by Hamas is made even more shocking by the fact that the victims were sentenced to death after trials which, if they happened at all, were summary and grossly unfair… Hamas must immediately and totally cease its use of the death penalty.”

Under Palestinian law, all death sentences must be approved by the Palestinian Authority, but Hamas administration carries out executions without first obtaining the president’s official consent.

Al Ray further reported that, following the executions, a number of other informants surrendered to Palestinian resistance, on Friday, announcing their repentance for collaborating with Israel.

One citizen commented: “The spies caused a lot of damage – deaths and destruction – in Gaza, before and during the ongoing Israeli offensive.”

The identities of the executed individuals are not yet known, according to the PNN, as their heads were covered before they were shot. The executioners were also masked.

Collaborators were called upon, by Palestinian resistance, to repent and save themselves by surrendering to the nearest security centers — this in conjunction with the announcement of a ‘new phase’ in dealing with a ‘dangerous and strange phenomenon’ which has led to the deaths of more than 2,000, the injuries of over 10,000 and the internal displacement of over 100,000 Palestinians, as thousands of homes have been completely destroyed by Israel’s relentless bombardament of the region.