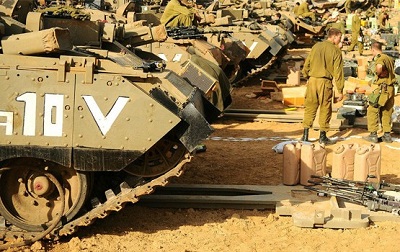 Following the decision by the Israeli government to pull out of negotiations for a long-term truce and renew airstrikes on Gaza, beginning Tuesday, August 19th, the Israeli military announced, Saturday, that it is prepared for another ground invasion of Gaza, and has called up 10,000 reservists to that end.In the ground invasion which began two weeks into the Israeli assault ‘Operation Protective Edge’ in July, 60 Israeli soldiers were killed by Palestinian resistance fighters. Several hundred Palestinian resistance fighters are estimated to be among the more than 2,000 men, women and children who have been killed since July 8th. The vast majority of the Palestinians killed are civilians who were hit by Israeli airstrikes either in their homes, on the street, or in designated United Nations shelters. Whole neighborhoods in Gaza were reduced to rubble by the Israeli airstrikes.

Later, on Friday, following the first death of an Israeli child in the six-week long conflict (over 400 Palestinian children have been killed), a new ground invasion of Gaza was announced by Israeli authorities as a distinct possibility.

The Israeli Prime Minister Binyamin Netanyahu stated, in July, that he is planning to re-occupy a large part of the Gaza Strip, to create a ‘buffer zone’ which would essentially annex, to Israel, nearly half of the already overcrowded Gaza Strip.

In the initial ground invasion, Israeli troops were met with strong resistance, and ended up retreating back to the edges of the Gaza Strip without achieving the declared objectives of halting Palestinian resistance rockets and disarming Hamas.

Since the Israeli invasion of Gaza began on July 8th, an estimated 87,000 army reservists have been called up to participate in the attack. Israeli polls claim that 92% of all Israeli Jews are supportive of the attack on Gaza. At least a hundred Israeli reservists have refused to fight.

Fifty of them signed on to a letter published in the Washington Post, which states:

‘We were soldiers in a wide variety of units and positions in the Israeli military—a fact we now regret, because, in our service, we found that troops who operate in the occupied territories aren’t the only ones enforcing the mechanisms of control over Palestinian lives. In truth, the entire military is implicated.

‘Many of us served in logistical and bureaucratic support roles; there, we found that the entire military helps implement the oppression of the Palestinians.

‘The military plays a central role in every action plan and proposal discussed in the national conversation, which explains the absence of any real argument about non-military solutions to the conflicts Israel has been locked in with its neighbours.

‘The military enshrines an image of the ‘good Israeli,’ who in reality derives his power by subjugating others.

‘By law, some of us are still registered as part of the reserved forces [others have managed to win exemptions or have been granted them upon their release], and the military keeps our names and personal information, as well as the legal option to order us to ‘service.’ But we will not participate — in any way.’

Palestinian leadership from all Palestinian political parties have been working tirelessly since the talks broke down, on Tuesday, to bring negotiators back to the table to render a long term truce, but Israeli officials have flatly refused all attempts to get them to return to Egypt to negotiate.