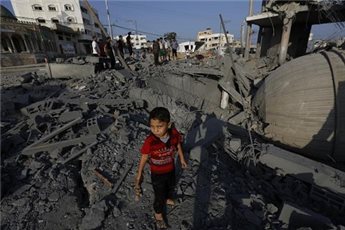 Egypt has proposed a new ceasefire for Gaza which would open the border crossings, allowing in aid and reconstruction materials, according to a senior Palestinian official.Palestinian leadership, including Hamas, would be willing to accept the deal if Israel does, the official reportedly told AFP, adding that negotiations on disputed points would be deferred to a later date.

Egypt has confirmed that both parties have been made aware of the proposal, while another Palestinian official said that Palestinian and Israeli delegations could be invited to return to the Cairo negotiating table within 48 hours.

Sami Abu Zuhri of Hamas said, on his Twitter account, that ‘so far, there is nothing final’.

The Walla Israeli news agency also stated that the month-long ceasefire will include the opening of the Rafah border terminal and that, so far, there is no final agreement, as the army continues to bombard Gaza.

Khaled al-Batsh of the Islamic Jihad said that he expects the month-long cease to be declared in the coming hours.