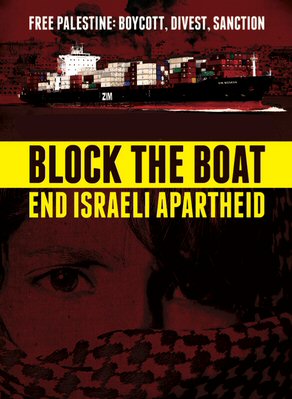 Ordinarily, they say, the ship would have moved to the Port of Seattle within a few hours and been ready for a longshore work shift starting that same Sunday at 6 PM. However, ZIM CHICAGO spent a full day anchored north of Vashon Island, only docking on Monday afternoon. As a result, the longshore work shift to unload the ship began a full 24 hours later, on Monday at 6 PM.

“We know of no other reason for the ship to wait for an open dock except to avoid spreading the impact of our blockade to other ships, who might then ask for refunds because of delays. This would not be out of simple goodwill toward other shipping lines, but rather to avoid isolation from other shipping lines that might refuse to share berths with ZIM ships in the future,”, said Ed Mast, one of the blockade organizers.

“A full day’s delay costs ZIM not only the extra running time money for fuel and staff, but also potential losses in cargo diverted to other ships, as well as credibility with customers that might start to distrust the irregular schedule, and credibility with other shipping lines that might refuse to share berths with ZIM at this and other ports.”