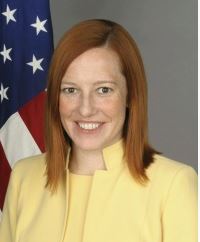 US State Department Spokesperson Jen Psaki stated, Friday, that international recognition of a Palestinian State is “premature,’ alleging the United States supports the establishment of Palestinian State only “through negotiations.”Her statements came after Sweden said it would recognize the State of Palestine, and called on all European Union countries to do the same. Sweden called for a two-state solution to resolve the Palestinian-Israeli conflict.

Psaki said that “only negotiations could lead to the establishment of a Palestinian State,” following a comprehensive final status peace agreement signed between Tel Aviv and Ramallah.

She added that Secretary of State John Kerry, who revived direct peace talks in July of 2013 and April 2014, was acting on U.S. interest to reach a peaceful solution based on the two-state solution.

Psaki also called on both parties to push forwards in direct talks, and to uphold the needed “determination.”

The US continues to grant Israel billions of dollars each year, in addition to direct military aid and joint army drills, and, despite its “denouncement” of Israel’s growing illegitimate settlement activities, it continues to support Tel Aviv and continues to shield it from any UN Security Council resolution against its ongoing occupation and violations.