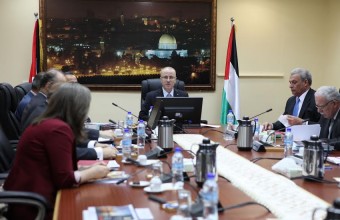 The National Consensus Government released its plan for Gaza’s reconstruction and recovery to the public, on Thursday. The $4 billion plan provides a roadmap through the current humanitarian crisis to long-term development, the PNN reports.The plan was developed by the Higher Inter-Ministerial Committee for the Recovery and Reconstruction of Gaza and chaired by Deputy Prime Minister Dr. Mohammad Mustafa. It forms the basis for mobilizing resources and efforts at the international conference to be held in Cairo, on October 12, 2014 (www.mfa.gov.eg/gazaconference).

“The Government will no longer accept the isolation and repression of our people in Gaza,” said Dr. Mustafa. “Gaza is an integral part of the Palestinian state and its gate to the Mediterranean. Its development is crucial for the viability of the Palestinian state. There is no doubt that the success of the Government in the reconstruction of Gaza is key to ensuring the stability of Gaza, Palestine, and the region.”

The plan is based on the government’s preliminary assessment, which was conducted in Gaza by Palestinian ministries and agencies, and with the support of local and international partners. The assessment uses the situation prior to the assault as a baseline, but contextualizes it within the experience of Israel’s ongoing blockade of Gaza.

This plan was developed with the intention to transition from relief efforts to longer-term development needs, the PNN further reports. The government plans to use $414 million to respond to immediate needs of citizens, while allocating $1.2 billion for stimulating an early recovery. The long-term reconstruction phase will reportedly need some $2.4 billion.

The also government estimates that an additional $1.9 billion is needed to repair public and private infrastructure. Housing is the most important issue in Gaza at this moment, as a harsh winter is expected to arrive in as little as two weeks. Over 110,000 people are displaced throughout the region, in collective centers or host families, as they wait a dignified resolution to their homelessness.

Economic revitalization will require $1.2 billion. As with infrastructure, the government’s plan has immediate and long-term goals. Re-activating economic productivity is essential for restoring livelihoods and enabling local businesses to serve and profit from the recovery and reconstruction process.

In the immediate aftermath of this conflict, the government will direct $700 million towards providing wider social safety nets, stronger health and psychosocial services, and greater educational opportunities.

Furthermore, the National Consensus Government aims to undertake the long-awaited and much-needed effort of consolidation, ending years of political and geographic division. Operational capacities will be built at the central and local level, with $183 million in strategic support for reintegration.