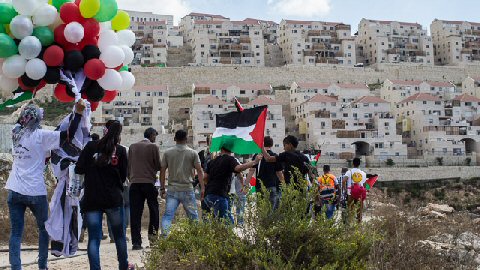 Residents of the Bethlehem-area village of Wadi Fukin have begun weekly demonstrations against Israel’s planned expropriation of 4000 dunams in the West Bank. For five weeks now the villagers have been protesting against this theft of land, 25 percent of which belongs to Wadi Fukin.

Unaccustomed to Israel’s military repression, many villagers told the AIC they were shocked when the first protest was met with copious amounts of tear gas. Still the community continued protesting, altering the protest route in order to reduce Israeli violence, and support has been growing. “The fourth demonstration was heavy and well attended”, a protestor who does not wish to be named told the AIC. A committee to organize the protests was established and the weekly protest is meant to continue.

A smaller number of protesters took part in last Friday’s demonstration as many were preparing for the Eid al Adha holiday, which began that night. Around 40 villagers, internationals and journalists marched toward the nearby settlement of Beitar Illit, before soldiers prevented them from advancing. Large banners, made to fly with balloons, that stated “This is our land“ in Hebrew were subsequently taken from the demonstrators by the soldiers. Protestors carrying signs and flags were met with aggressive behavior and as the demonstration retreated, soldiers started to chase the protesters. A volunteer medic from the Palestinian Medical Relief Society medical team was detained, blindfolded and handcuffed, but later released on site. Two stun grenades were used against protestors who were throwing stones at the soldiers near the village after the demonstration had ended.

Already surrounded by Tsur Hadassah and the settlements of Beitar Illit and Hadar Beitar and with new plans to build a further settlement to the west, Wadi Fukin residents fear being completely surrounded by settlements. And as 60 percent of the community’s population relies on agriculture for their livelihood, the land grab will have disastrous effects on their economy.

However, discussions about the weekly event have arisen in the village.

Some villagers do not participate in the protests. They fear losing their work permits in Israel while others do not hold the necessary paperwork and see no possibility of winning the struggle against the planned land theft. Mayor Ahmed Sokal, however, stated that the village council will help those lacking the required documents.