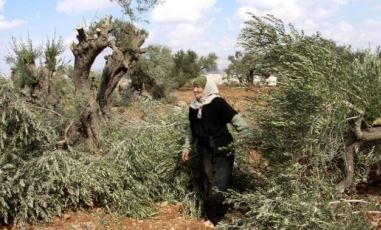 A number of extremist Israeli settlers invaded Palestinian orchards near the West Bank city of Bethlehem, before cutting and uprooting dozens of olive trees.Hasan Breijiyya, coordinator of the Popular Committee against the Wall and Settlements in the Bethlehem district, stated the settlers came from Beitar Illit illegal settlement, built on Palestinian lands belonging to residents of Nahhalin, Husan and Wadi Fokkin, and uprooted around 38 olive trees, and harvested them.

The settlers also cut around 200 olive trees belonging to Mahmoud ‘Atiyya Shousha, in Ebtat nearby area, next to the settlement.

Breijiyya said Israeli soldiers and settlers have escalated their attacks against Palestinian orchards, west of Bethlehem, by illegally occupying orchards, uprooting trees and burning them, especially in orchards that became surrounded by the Beit Illit settlement, and close to it.

On Tuesday, October 7, a number of settlers torched 30 olive trees dating from Roman times, in the village of Nahhalin. http://www.imemc.org/article/69331

— Palestinian Injured After Settlers Attack Villagers In The Orchards
http://www.imemc.org/article/69323