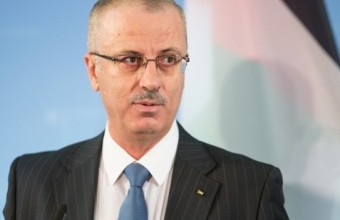 The Palestinian Unity Cabinet arrived in Gaza, Thursday, led by Palestinian prime minister Rami Hamdallah and a number of other Palestinian officials, to hold its first meeting since its formation last June. According to the Palestinian News Network (PNN), the meeting was set to be held in president Mahmoud Abbas’ residence, between Fateh and Hamas officials.

Salim Saqqa, Minister of Justice, said that Palestinian Authority members and their delegation arrived in Gaza through Beit Hanoun checkpoint after receiving their permits, where they were officially welcomed by Gaza officials.

A press conference was held upon the cabinet’s arrival into Gaza, during which PM Hamdallah was quoted as saying, ‘The years of strife between us and the rift between the Palestinian factions are behind us, and the government is embarking on the mission to restore life in the Strip, to their right track.’

The meeting aimed to discuss rebuilding Gaza, and to call upon international assistance of $4 million.

PNN further reports that Hamdallah and his cabinet ministers toured several areas in the Strip, mainly those areas heavily damaged after the Israeli assault, including Al-Shuja’eyya neighborhood.

Hamdallah’s schedule included a meeting with the deputy leader of Hamas’ political bureau, Ismail Haniyeh, in his home at the A-Shata refugee camp, and to precede a general discussion between government officials of the situation in the Strip. Following this was scheduled a meeting between the ministers and Palestinian businessmen expected to take part in reconstruction projects, as well as long-term investments.

Hamdallah will make additional tours across the Gaza Strip, on Friday, mainly in its southern areas, and will then leave to Cairo through the Rafah checkpoint.