88 Palestinians Kidnapped Since the Beginning of October 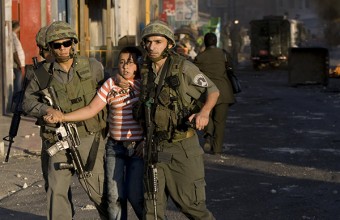 The highest percentage of imprisonment was accounted for in Hebron (25 prisoners), followed by Jerusalem (20 prisoners).

In Bethlehem the number reportedly reached 11, in Salfit 10, while the remaining prisoners were from the Nablus, Ramallah, Al Bireh, Tubas, Qalqilya and Tulkarm districts.

The decision to keep the six lawmakers in detention without trial or charges reportedly comes after they already completed between three and six months each under similar conditions.

As of mid-September, 33 Palestinian MPs and two ministers were being held in detention by Israel.

Ma’an further reports that over 7,000 Palestinians are currently being held by Israel, including around 500 under the policy of administrative detention, in which prisoners are detained without charge or trial — a colonial practice which dates back to the time of British Mandate borders.