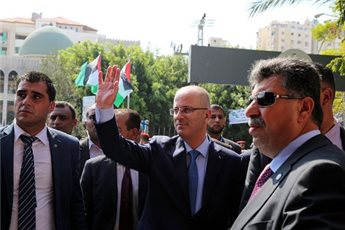 A delegation of Palestinian officials left the West Bank for Jordan, en route to Cairo, early Saturday, to participate in the previously scheduled international donor conference for the Gaza Strip. Additionally, US Secretary of State John Kerry is to call for a revival of the collapsed Israeli-Palestinian peace process, when he attends the conference, on Sunday.’The issue in question is very delicate, and requires all Palestinian efforts in order to support the government so it can rebuild what the (Israeli) occupation has ruined in the Gaza Strip,’ Ehab Bessaiso, the spokesman for the unity government, was quoted by Ma’an to say.

Gaza-based members of the delegation — Minister of Public Works Mufid Hasayna and Minister of Labor Mamoun Abu Shahla — are meeting the group in Egypt, via the Rafah crossing, Bseiso also stated.

According to Mr. Bessaiso , who also joined the delegation, the Palestinian Authority had submitted a $4 billion reconstruction plan for the Gaza Strip.

Furthermore, the unity government would work ‘tirelessly’ to make that happen, he said.

The Israeli assault on Gaza killed nearly 2,200 Palestinians, this summer, the vast majority of whom were civilians, while attacks by Gaza militants killed 73 on the Israeli side, overwhelmingly soldiers.

Meetings with Egyptian officials are set to be held before Sunday’s official conference.

In related news, US Secretary of State John Kerry will reportedly call for a revival of the collapsed Israeli-Palestinian peace process on Sunday, while attending the international conference, American officials said.

Kerry and 30 of his counterparts are to convene in Cairo alongside United Nations Secretary General Ban Ki-moon, who is said to be seeking $1.6 billion in aid to rebuild the region.

He is also to meet with Palestinian president Mahmoud Abbas, having last met at the UN General Assembly in September, according to State Department officials:

‘You will hear the secretary reaffirm the commitment of the United States to helping the parties achieve a negotiated two-state solution and our willingness to re-engage in the negotiations and help facilitate successful negotiations.

‘More broadly we are interested in sort of breaking the cycle we have been in in the last six years of war and reconstruction there,’ an official was quoted by AFP to have said.

Direct negotiations began in July of 2013 between Israel and the Palestinians in a US-brokered setting between the two parties. Over the course of the talks, Israeli officials announced their plans to build thousands of additional homes in illegal settlements across the occupied West Bank, inhibiting the flow of the proceedings and sparking global outrage.

The Palestinian negotiating team resigned in protest, in mid-November, with the Netanyahu regime later making quite clear its position on peace with the Palestinians, when the Israeli PM, during a meeting with young Likud supporters, boasted of his settlement building achievements:

“I was threatened in Washington: ‘not one brick’ [of settlement construction] … after five years, we built a little more than one brick…” he said, as quoted by +972 online magazine.

Asked “about peace talks with the Palestinians,” he reportedly replied, “about the – what?” to which his audience responded with laughter.

According to AFP, critics have charged that peace negotiations are used by Israel as a cover for continued settlement building and military occupation, highlighting that the number of settler units under construction increases during negotiations, while violence against Palestinians remains steadfast.