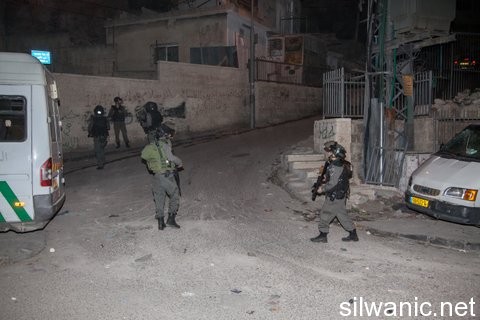 Seven Jerusalemites were injured on Friday night, during violent clashes which broke out in Silwan. In the Nablus district, on Saturday, Israeli forces abducted seven Palestinians from the Zwata, Balata and al-‘Ayn refugee camps near Nablus.Jerusalem’s Wadi Hilweh Information Center was notified that, following the burial of one Saeed Qaraeen, a fight broke out between family members and one house was set on fire, in addition to material damages and physical injuries which were sustained among the family members.

The argument turned into clashes with nearby Israeli authorities and settlers, upon which forces fired sound grenades and rubber-coated steel bullets towards neighborhood residents, leading to the injury of seven people.

One young man and a child were injured directly in the head, by shrapnel from sound grenades. Another young man was injured by shrapnel to the neck and yet another suffered a severe pain in his ear after being directly hit with a sound grenade; he was transferred to the hospital for treatment.

On Saturday, Israeli forces kidnapped seven Palestinians, including five brothers, from Zwata, Balata and al-‘Ayn refugee camps near Nablus, according to witness reports.

WAFA correspondence reports that Israeli forces raided Zwata camp, where they arrested five Palestinians, who are brothers, after breaking into and ransacking the fmaily home.

Forces additionally raided the Balata and al-‘Ayn refugee camps and several neighborhoods within the city, where they broke into and ransacked several homes, taking two Palestinians.