Palestinian Christian Leaders: Europe Must Recognize the State of Palestine 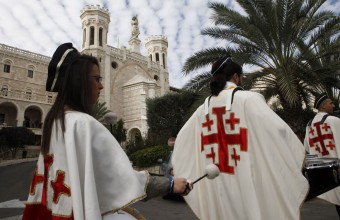 In a Middle East region that continues to suffer from the consequences of violence, the people of Palestine continue to live under occupation and in exile, the Palestinian News Network reports. Palestinian Christians, the descendants of the first Christians, are an integral part of the Palestinian people, and continue to suffer, just like our Palestinian Muslim and Samaritan brothers and sisters; we have been denied of our national and human rights for almost a century, heads of churches and Christian clergy in Jerusalem wrote in a letter sent to European Union officials.

The letter reads as follows:

‘From Jerusalem, our occupied capital, we send our urgent message to the whole world and particularly to Europe: We are yearning for justice and peace. Recognizing Palestine and defining Israel’s borders is a first step towards that goal.

We have endured dispossession and forced exile since 1948, when the majority of Palestine’s Christians were forcibly expelled from their homes in the Holy Land. We have persevered through 66 years of exile and 47 years of occupation, holding on to the message of peace of Our Lord. We are tired of calls for resumptions of negotiations while we can’t reach our churches due to a foreign power and our people continue to be humiliated by an undesirable occupation. We are waiting for the day that our churches will ring celebrating freedom and justice they add.

Christians have a duty to resist oppression. We believe the international community and particularly Europe has not done enough in order to achieve a just and lasting peace. You cannot continue holding our right to freedom and self-determination as an Israeli prerogative. We have a natural right to be free and Europe has a moral, legal and political duty to hold Israel accountable and support Palestinian non-violent initiatives to end the Israeli occupation, including the recognition of the State of Palestine on the 1967 border with East Jerusalem as its capital.

Until when will you continue accepting Israel’s violations of your own resolutions? Until when will you allow that the prospects of peace will continue to be destroyed by Israeli colonization? Until when should we be allowed to be treated as foreigners in our own homeland? Ending Israeli occupation is the only way for Palestinians, Christians and Muslims, to enjoy a life of prosperity and progress. It is also the surest way to secure continued Christian presence in this, our Holy Land, and to grant Israel the security that it continues to demand. Without Justice there can be no peace nor security.

It is time for Europe to understand that the only way to defeat extremism and terrorism in our region is to bring justice for all, starting by ending the historic injustice inflicted against the Palestinian people, an open wound that continues to bleed as the hopes for an independent Palestinian state are more elusive due to the expansion of Israeli settlements and the many restrictions imposed on our own people, including forced displacement.

In our Kairos document, we Palestinian Christians declare that the Israeli occupation of Palestinian land is a sin against God and humanity because it deprives Palestinians of their basic human rights, bestowed by God.

We believe that recognizing the State of Palestine on the 1967 border is the first step towards changing the current status quo. Banning settlement products and divesting from companies and organizations linked directly or indirectly to the Israeli occupation is also a must. 66 years after the beginning of the Palestinian Nakba and 47 years after the occupation, it is time for the State of Palestine to be free and become a full member of the United Nations. That is why we call upon European governments to fully endorse the just Palestinian quest for freedom and independence.

The international community, and particularly Europe, have a historic responsibility towards the rights of the Palestinian People. Europe has long championed the values of peace and human rights. Now, Europe can reflect this principled position by helping Palestine.

From the Holy Land, we call on you to take this principled position to recognize the State of Palestine and to abide by your legal responsibilities towards a nation under occupation, in order to be able to celebrate justice and peace in the land of the Prince of Peace, Jesus Christ.’

The document was signed by over a hundred Palestinian Church leaders, diplomats, and civil society leaders and organizations, including:

· Bishop Mounib Younan – Head of the Lutheran Church in Palestine and Jordan / Head of the World Lutheran Federation.