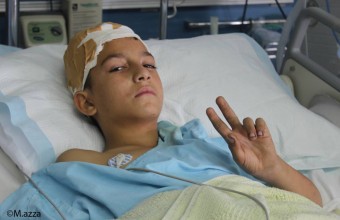 ‘Yesterday, they were training soldiers by using families, children and homes as military practice. Tamer Abu Salem, 13 years old, was in Lajee Center moments before he was shot in the head with a rubber coated steel bullet. Tamer underwent emergency surgery after arriving at the hospital and he is still in the ICU. Before the soldiers left the camp, they shot two bullets through Lajee Center’s windows as punishment. The occupation is on-going, and our struggle continues.’