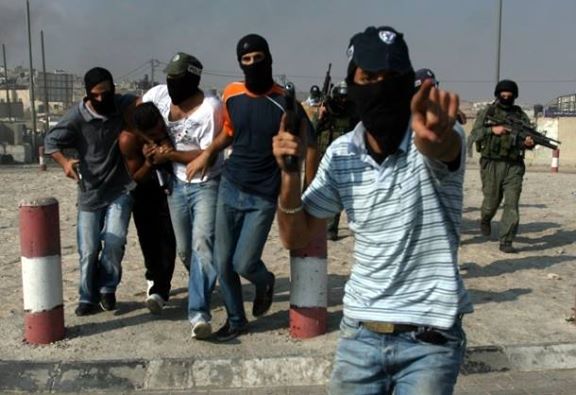 Local sources in occupied East Jerusalem have reported that undercover soldiers of the Israeli military kidnapped, on Sunday evening, four Palestinian children in the city, while Palestinian youth managed to prevent a settler from kidnapping a 4-year-old child.Head of the Jerusalemites Detainees Committee Ahmad Abu ‘Asab said that undercover soldiers dressed like Muslim Sheikhs kidnapped Ahmad Saleh Abu Khdeir, Qusai Abu Khdeir, Abdul-Hakim Abu Khdeir, and Mo’tasem al-Ja’bary, in Shu’fat town north of Jerusalem, and took them to an interrogation center in the city.

In related news, a fanatic Israeli settler attempted to kidnap a 4-year-old Palestinian child from the Sa’diyya neighborhood, in the Old City of occupied Jerusalem, but a number of local Palestinian youth chased the settler, who eventually had to let the child go after running, while carrying the child for nearly 400 meters, the Palestine News Network said.

Abu ‘Asab said that the father of the child managed to identify the settler who attempted to kidnap his child after the police showed him a number of photos. The settler was held by police for interrogation.