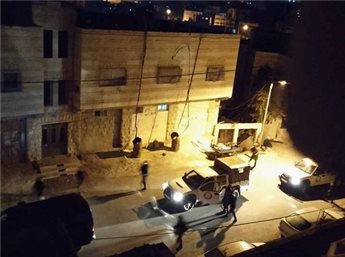 Palestinian Authority security forces killed a 25-year-old man, early this morning, during a raid in the southern West Bank city of Hebron.Security officials informed Ma’an News Agency that clashes broke out as PA forces attempted to arrest several wanted men who had been hiding south of Hebron, in Area C.

It remains unclear just what the men are accused of. However, they reportedly opened fire at security forces during the raid, injuring seven security personnel, including one who is now in critical condition.

PA forces responded with live fire, injuring one Bilal al-Rajabi, who later died in a hospital.

PA security continues to work in close coordination with the Israel, despite fierce Palestinian resistance to the occupation.

Also in the occupied West Bank
, on Thursday, the Israeli army abducted a Palestinian youth at an Israeli checkpoint near Bethlehem, according to reports by security sources.

They said that Israeli soldiers arrested 19-year-old Mohammad Fanoun who was traveling to Jerusalem through ‘checkpoint 300’, under the pretext of illegal entry to Israel.

Israeli authorities rarely issues entry permits for Palestinians, either for work or for prayers at al-Aqsa Mosque in Jerusalem, which provokes a large number to enter without permits.

Meanwhile, WAFA reports that Israeli soldiers broke through into an agricultural area near the village of Rummaneh, northwest of Jenin, where they detained a group of farmers and volunteers who were harvesting olive trees.

The soldiers transferred them to the nearby Salim military complex, upon which the farmers were interrogated army officers before being released.