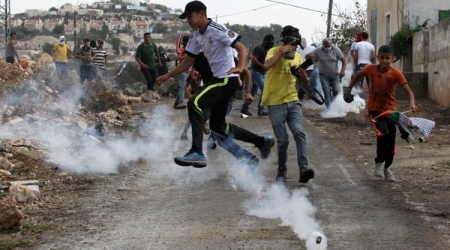 Two Palestinian youth were injured by Israeli fire during clashes which erupted in the town of Khirbet Safa, to the north of Hebron, on Wednesday evening.Clashes erupted between Palestinian youth and Israeli soldiers who raided Safa town, firing rubber-coated metal bullets,and tear gas towards citizens, injuring dozens of people; many cases of suffocation among residents were reported.

According to Al Ray, one young man survived live fire by Israeli forces, after he allegedly threw fireworks towards them.

Spokesman of the National Committee Against the Wall and Settlements, Mohamed Awad told Safa News Agency that 20-year-old Musab Khalil was wounded by two metal bullets in the right side of his foot during the raid.

Musab was transferred by a Red Crescent ambulance, out of Beit Ummar, to the medical complex in Halhul, his injuries described as moderate.