CPS: No Prosecution of Galloway Over ‘Israel-free Zone’ Comments 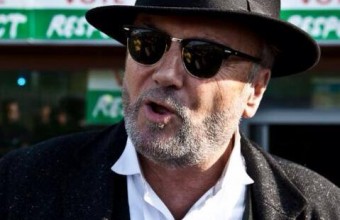 The UK’s Crown Prosecution Service has confirmed that Bradford-West MP George Galloway will not be charged over a speech in made in Leeds, this past August, which asserted that Bradford was an ‘an Israel-free zone’.Following Galloway’s speech on August 2, which was posted online, several complaints were made to Yorkshire police that Galloway’s comments amounted to hate crime.

According to the PNN, these allegations have been comprehensively dismissed by the CPS.

‘This has been an extremely expensive waste of police’ and CPS’ time forced on them by ultra-Zionists who were pursuing a vendetta against me,’ Galloway said.

‘My comments were aimed at the state of Israel which – I repeat what I said at the time – is an illegal, savage and barbarous state, and had nothing whatever to do with race or religion. And they have the benefit of being true. That country has more censures against it by the United Nations than the rest of the countries in the world put together, refuses to abide by resolutions and continues to illegally grab land and persecute the rightful owners of it and uses its military to blockade and murder the people of Gaza. I take back not a word and I will continue to forcefully condemn Israel.’

Mr. Galloway additionally described a visit by the Israeli ambassador to Bradford, shortly after his speech, as a ‘cheap and vulgar publicity stunt’ and condemned local Muslims who had met him as ‘willing dupes’.

He continued: ‘It remains the case that there is a worldwide boycott of Israel, its goods, its services, its academics. I hope the citizens of Bradford will join me in refusing to treat with the advocates of this hateful and oppressive regime and truly make Bradford an Israel-free zone.’

See also 07/04/14 Galloway: Where Are Arab Rulers to Help Palestinians?