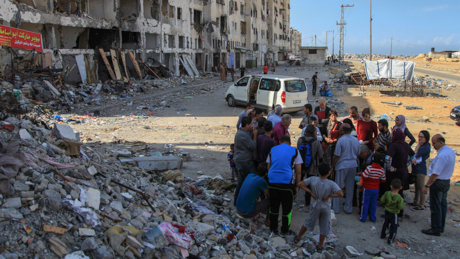 International observers witness the impact of “Operation Protective Edge” and the closure of Gaza on human rights defenders’ work inside Gaza.On October 28th, a five-member delegation from Europe and Guatemala entered Gaza.

They went to Gaza to reaffirm their fullest solidarity with Raji Sourani and his colleagues at the Palestinian Center for Human Rights (PCHR), and to inquire into the threats and restrictions Raji Sourani and his colleagues face with regards to their security, rights and fundamental freedoms guaranteed under the Universal Declaration for Human Rights, International Covenant on Civil and Political Rights, UN Declaration on Human Rights Defenders and customary international law.

Jakob von Uexkull said: “Restrictions placed on Raji Sourani’s freedom of movement in and out of Gaza are unacceptable. Raji Sourani advocates against violations of human rights and for the rule of law regardless who the perpetrator is, whether it is Israel, Hamas or the Palestinian Authority.

That he does so while still living in Gaza is admirable and calls for our full support. For all those whose human rights needs defending, it is very important that Raji Sourani can carry out his vital work without obstruction.”

Standing in Gaza, the members of the delegation note:

“Nothing prepared us for the reality. What we have witnessed is the aftermath of a manmade disaster.

‘Operation Protective Edge’ has been the second major offensive on the Gaza Strip in five years and its impact has been devastating. We learned that many people, and particularly children, are severely traumatized after the attacks and are in urgent need of psychological support. Additionally, the physical destruction was absolutely massive and in some areas reminded us of the pictures we have seen from the Second World War.

From the stories we heard and our own observations, many of these attacks were clearly directed towards civilians and civilian property.

They were not collateral damage as a result of attacks against military targets. There is a high likelihood that war crimes have been committed and, to this end we fully support the UN Human Rights Council’s on-going investigation of purported violations of international humanitarian law and human rights law in the latest Gaza conflict.

We hope that the independent Commission of Inquiry will establish responsibility for these crimes and hold those who have committed them to account.

Due to the 7 year closure of the Gaza Strip – recognised as illegal collective punishment by the International Committee of the Red Cross – the sick cannot access appropriate health care, families are kept apart, and the young cannot travel to study.

The continuation of this illegal closure policy, and the repeated commission of war crimes, are only possible because of the continued impunity.

The absence of accountability has fuelled further violations. The people of Gaza have been denied international protection, undermining the very concept of universal human rights.

The closure of Gaza must be lifted. Without reconstruction and movement there is no hope. The current situation can only make future conflicts more likely.

We also express our deepest concerns about the restrictions that Raji Sourani and his fellow human rights defenders in Gaza face in exercising their freedom of movement, unhindered access to and communication with international bodies, and the right to the lawful and peaceful exercise of their profession as guaranteed under international law.

Raji Sourani received the Right Livelihood Award in 2013 “for his unwavering dedication to the rule of law and human rights under exceptionally difficult circumstances.”

As Director General of the Palestinian Center for Human Rights (PCHR), a non-governmental organisation based in Gaza City, Sourani and his colleagues have assiduously documented violations of international humanitarian law during the recent hostilities in the Gaza Strip during “Operation Protective Edge”.

During the conflict, Raji Sourani continuously spoke against human rights violations that were being committed, and also wrote to Palestinian leaders urging them to intervene immediately and decisively to stop Hamas’ from committing extrajudicial executions.

As a result of the closure of the Gaza Strip, Sourani has missed over a dozen international conferences and meetings that he had been invited to in his capacity as Director General of PCHR and President of the Arab Organisation of Human Rights (AOHR).

In July 2014, a declaration signed by 50 Right Livelihood Laureates strongly supported “the outstanding and courageous work, determination and perseverance – under the thunder of bombs – of our fellow recipient Raji Sourani and his colleagues at the Palestinian Center for Human Rights in Gaza.”