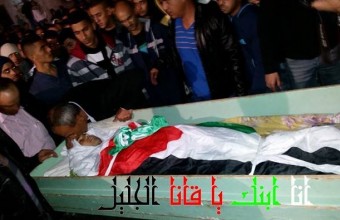 22-year-old Palestinian Kheir Eddin Hamdan, from Kafr Kanna, near South Galilee, on Friday, was killed by Israeli police for no apparent reason, after they kidnapped his brother.According to the PNN, police claimed that Kheir was holding a knife, and tried to stab a policeman.

Eyewitness from Kafr Kanna, however, said that Elisam police unit shot Hamdan dead, for no reason whatsoever, and that Hamdan neither held any knife, nor tried to attack the policemen.

Video footage: Kheir was angry because of his brother’s kidnapping and the toxic gas that was sprayed in his face. Hamdan expressed his anger by shouting. As soon as the police opened the door to get out of the car, Kheir walked away. The policeman then shot him dead at close range.

The Hamdan family demanded that the perpetrators be sued, saying that their son was martyred by Israeli police treachery.

Another member of the family, Sabri, was killed a few years ago in Kafr Kanna.