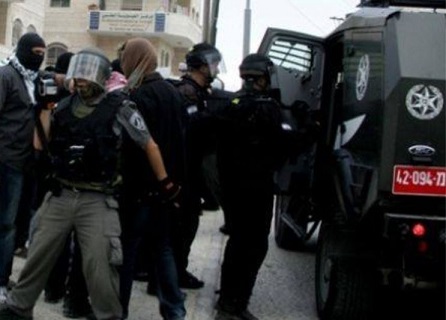 Israeli soldiers invaded, on Monday at dawn, a number of communities in the southern West bank district of Hebron, searched homes, and kidnapped two Palestinians.Local sources in Hebron city said the soldiers broke into a home in the city, searched and ransacked it, and kidnapped a resident identified as Ahmad Wadah Shihada, 19.

Soldiers also invaded Beit Ummar town, near Hebron, and drove around in its streets before kidnapped Omar Mohammad Breigheeth, 33, after smashing the front door of his property.

Spokesperson of the Popular Committee against the Wall and Settlements in Beit Ummar, Mohammad Awad, said Breigheeth is a former political prisoner, and that he was moved to the Etzion military base, north of Hebron.

The soldiers also invaded the home of resident Bader Mahmoud Ekhlayyel, 70, and ransacked his property before kidnapping his son, Yousef, 32 years of age.

The army also installed roadblocks at the entrances of Halhoul and Saâ??ir towns, and the al-Fawwar refugee camp, stopped and searched dozens of cars, and inspected the ID cards of the passengers.