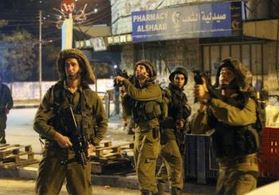 Palestinian medical sources have reported, Friday, that five Palestinians have been shot by Israeli army fire, one in the neck, during clashes in the southern area of Hebron city, in the southern part of the occupied West Bank.The sources said that all wounded residents were shot by live rounds, and have been moved to the Alia Governmental Hospital in the city.

Local sources said dozens held a protest, organized by the Hamas movement, and marched from a mosque towards the Tareq Ben Ziad junction before the army fired gas bombs, concussion grenades, rubber-coated metal bullets and rounds of live ammunition.

Four of the wounded were shot by live rounds in their legs, and the fifth was injured by shrapnel to the neck.