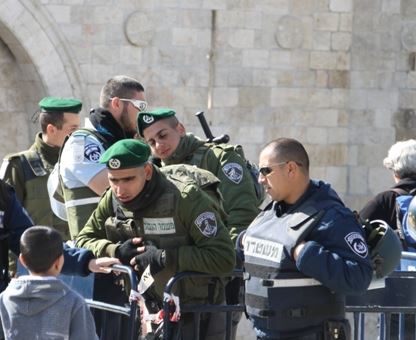 Dozens of soldiers and police officers have been deployed in different parts of the city, especially in Bab al-‘Amoud area and the soldiers conducted searches of Palestinian homes, property and cars.

Israeli sources said a young man “believed to be an Arab” stabbed an Israeli man in the back using a screwdriver, and fled the scene; the wounded man is in his thirties.

According to Israeli daily, Haaretz, the man was stabbed near the Damascus Gate of the Old City, and ran away from the scene until running into Border Police officers in the Muslim Quarter, who then took him to a police station, before an Israeli ambulance transferred him to Shaare Zedek medical center.

At least eight Palestinians were abducted, late Saturday night and early Sunday, by the Israeli authorities in occupied East Jerusalem, whereas at least five others in the West Bank were summoned to appear for interrogation before the Israeli intelligence, say local sources.

Later Sunday, Israeli police arrested two brothers from Bethlehem at their workplace in Jerusalem, under the pretext of ‘entering Israel without a permit.’ The brothers were identified as Adham, 19, and Mohannad Zawahra, 17. http://www.imemc.org/article/69730