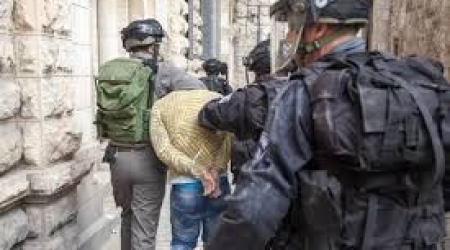 Israeli forces arrested early Tuesday 21 Palestinians, including three minors, from the West Bank and Jerusalem, in addition to 14 members of the family of two Palestinian suspects in regard to an attack on a West Jerusalem synagogue. PFLP has reportedly claimed responsibility for the attack.According to reports by local sources and the Palestinian Prisoner’s Club (PPC), Israeli police raided various Palestinian neighborhoods in occupied East Jerusalem, where they abducted several Palestinians.

In Hebron, Israeli forces kidnapped three minors near the entrance of Beit Ummar, to the north of Hebron. The youth were identified as Wasim Abu Maria, 14, Ahmad al-Slaibi and ‘Abdallah Abu Maria, age 15.

Forces raided several Hebron neighborhoods, setting up checkpoints at the entrances of Sa‘ir and Halhul bridge, to the north and northeast of Hebron, where they stopped and inspected Palestinian-registered vehicles and examined passengers’ ID cards.

Dozens of Israeli settlers attacked passing Palestinian vehicles with stones, on Tuesday, near the town of Tarqumia, to the west of Hebron.

Witnesses said that the settlers, backed by an Israeli army force, broke into a highway connecting the nearby town of Idna with the city of Hebron, where they blocked the road and pelting Palestinian vehicles with stones, causing damages.

The assault came just hours after a similar attack by settlers on a Palestinian school in the village of Urif, to the south of Nablus, while they also blocked a nearby road.

At least four Palestinians, including a press cameraman working for Reuters News Agency, were injured on Tuesday during confrontations in Urif.

Three Palestinians were shot and injured by rubber-coated steel bullets, and were transferred to a nearby medical facility.

Abdul-Rahim Qusini, a press cameraman with Reuters News Agency, was reportedly hit with a stone during the confrontations and also taken to a hospital for medical treatment.

In the Ramallah district, four Israeli military vehicles and three troop carriers raided the town of Silwan, to the northeast of the city, and kidnapped Nash’at Jum‘ah, age 20, after breaking into his family’s house.

Forces also raided Bil‘in village, where they took Majdi Burnat, 20, Samih al-Khatib, 19, and Muhammad Yasin, 20, after breaking into and ransacking their homes.

Meanwhile, in the Tulkarem district, forces raided Shwaika village, to the north of the city, where they abducted Ahmad Ikbariya after breaking into his family’s house.

Also on Tuesday, Israeli police took into custody around 14 members of the family of the two Palestinians suspected of an attack on a West Jerusalem synagogue facility.

WAFA correspondence further reports that hundreds of police officers raided and closed off Jabal al-Mukaber, where the houses of the two suspects are located, attacking two homes of Abu Jamal family with tear gas, stun grenades and rubber-coated steel bullets.

Forces took 14 members of Abu Jamal family, spurring clashes and injuring 22 others at the scene.

The two suspects were shot dead early Tuesday, by police, following the attack which killed five Israelis, according to WAFA. They were identified as Ghassan and Odai Abu Jamal.

Indian news site, The Hindu, stated that the Popular Front for the Liberation of Palestine (PFLP) announced, via e-mail, that the two attackers are members of the group, and that “the attack was a natural response to the Israeli attacks on Jerusalem and on the Palestinians”.

Rabah Muhana, a senior PFLP leader from Gaza, said that “Palestinians should work hard on making the Israeli occupation of our territories illegal by unifying our efforts and ending the internal Palestinian division”.