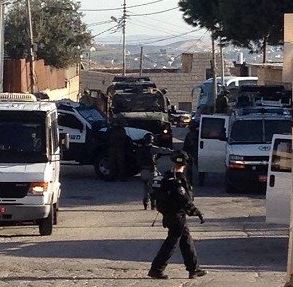 Medical sources have reported that at least twelve Palestinians have been injured by Israeli army fire in occupied East Jerusalem; one of them suffered a serious head injury, while more than 35 suffered the effects of tear gas inhalation. Soldiers also attacked a blind woman, a cancer patient, and kidnapped several Palestinians.
Dr. Amin Abu Ghazala, in charge of the Emergency Unit of the Red Crescent in Jerusalem, said at least twelve Palestinians have been shot by rubber-coated metal bullets; four of them have been hospitalized after suffering injuries to their face and heads.

Abu Ghazala added that at least 35 Palestinians suffered the effects of tear gas inhalation, and received treatment by local medics.

Medical sources in Sur Baher town, in Jerusalem, said one child was shot by a rubber-coated metal bullet in the head, and was moved to a local hospital suffering a serious injury.

The Maan News Agency has reported that clashes took place in Sur Baher after undercover soldiers invaded it, broke into a number of homes before kidnapping three young Palestinians, and attacked their family members.

Resident Ahmad Khader Nimir told Maan that many soldiers, accompanied by military dogs, invaded his home, and attacked the family while violently searching the property.

He said the soldiers assaulted his 52-year-old blind wife, and a young cancer patient, causing several injuries; his wife was moved to a local hospital for treatment.

Nimir added that the soldiers kidnapped his sons Tareq, 30, and Rashed, 24.

Soldiers also invaded the home of Nimir Hammad, 33, in Jabal Za’qouqa area in Sur Baher, and searched his property before attacking and kidnapping him.

A child, identified as Amir Abu Jamal was moved to the al-Makassed Hospital suffering sharp respiratory issued due to the effects of tear gas inhalation.

In the at-Tour town, local youths clashed with Israeli soldiers and police officers, and hurled stones and Molotov cocktails at them; one police vehicle was partially burnt.

Soldiers fired dozens of gas bombs and rubber-coated metal bullets at Palestinian youths near the al-Makassed Hospital, and occupied rooftops of several homes in the area.