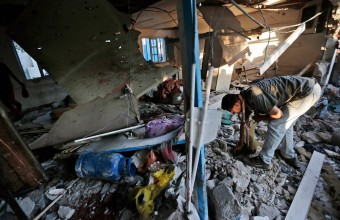 After refusing to cooperate with a one UN committee, Jerusalem has reportedly agreed to work with another, so long as certain conditions are met.According to the PNN, Israeli newspaper Haaretz said, Thursday, that Israel has agreed to cooperate with the UN Headquarters Board of Inquiry, established by Secretary-General Ban Ki-moon, in order to investigate the damage done to UNRWA facilities during the assault on the Gaza, this past summer.

A senior Foreign Ministry official stated that Israel’s ambassador to the United Nations, Ron Prosor, had submitted a letter on the issue to Ki-moon on Tuesday. The official added that Israel had set conditions for cooperation, but declined to elaborate.

Last week, Ban announced the formation of an ‘internal and independent’ board which would probe the damage inflicted on UN installations. He said that the board would also investigate cases in which weapons were found at UN facilities.

The board ‘will review and investigate a number of specific incidents in which death or injuries occurred at, and/or damage was done to United Nations premises,’ the UN stated. ‘The Board will also review and investigate incidents in which weapons were found to be present on United Nations premises. The Secretary-General expects that the Board will enjoy the full cooperation of all parties concerned.’

A similar UN headquarters board of inquiry investigated the Gaza conflict over the winter of 2008-09. In this case, Israel cooperated with the investigation, and the board harshly criticized Israel for certain actions during the war.

Israel’s disappointment with the results of that inquiry is presumably the reason it has set conditions for the current inquiry.

Last week, Israel announced that it would not be cooperating with the UNHCR investigation headed by Canadian jurist William Schabas, reasoning that it was ‘tendentious and one-sided.’